Rogue is from the Non MAU series X-Men: Evolution.

Rogue is a mutant, member of the X-Men, and former member of the Brotherhood of Mutants. She joined the Brotherhood after believing the X-Men were her enemies, but came to realize that they were not once she absorbed the memories of Mystique, who had morphed into various members of the team to try and convince her that they were villains. Prior to this, she observed their demeanors, particularly Cyclops, who she would later gain a crush on.

The crush she gained on him would be unrequited, as he himself fell in love with Jean Grey. The latter was someone that Rogue saw as a rival, though who she eventually began to respect after realizing that hostility was only felt her way. She proved to be the key in stopping Apocalypse, who she defeated by using the powers of Leech and sending him through time and space. In the future vision of Charles Xavier, she was shown to have remained a member of the team as an adult.

Rogue was raised by her foster mothers Destiny and Mystique. While growing up, Rogue was kept away from the rest of her peers, out of fear that she might do something to them with her powers.

Rogue attended a dance, but declined to actually dance as opposed to stand outside and gaze. While she was by herself, a boy named Cody and his friend Ty came behind her. After Cody revealed that he had interest in Rogue and had not actually made any contact with her, Ty pushed him up to her. With Rogue making first contact, Cody made it known that he was interested in dancing with her. Despite not wanting to dance initially, Rogue decided to after questioning the "harm" in one dance.

As the two began dancing, Ty tried to get Cody closer to Rogue by pushing him next to her, though overdid it and caused him to fall into her. As Rogue was on the ground and recovering from the fall, Cody offered his hand to her and touched her wrist, which cased her to absorb his memories and abilities as Cody fell unconscious. Rogue started to become confused by the multiple memories she was getting from touching him, and tried to flee from the scene.

Despite Ty blocking her, Rogue exhibited Cody's strength by pushing him out of the way. Charles Xavier felt her powers, and decided to assemble the X-Men. Once Mystique was contacted by Destiny over the issue, she knew that the X-Men would try to recruit Rogue and devised a strategy to keep her with the two; using her powers to morph into members of the group to convince her of their hostile nature.

Rogue, struggling with identifying who she was, went to Cody's home. With Cody's memories, she knew the keys to his home were on the roof and went inside. Amongst Cody's trophies and possessions, Rogue tried to identify herself. This was interrupted by Mystique, who posed as Wolverine and attacked her. During the attack, she made sure to get the message across that the X-Men were attacking her. After Rogue fled from the house, Mystique morphed into Storm and attacked her again with some "well placed" mimics of Storm's powers.

As Rogue came across Destiny, the latter claimed the X-Men were a group of mutant hunters as Wolverine, Nightcrawler and Shadowcat came running towards her. Rogue insisted that Destiny flee, and fled from the group. Nightcrawler, noticing that she was scared of Wolverine, convinced the latter to allow him to try to communicate with her. Unfortunately, Wolverine angered Shadowcat by referring to her as "half-pint". When Nightcrawler confronted her, Rogue only started to believe in him when he talked about his past experiences with being a mutant and coming on top of it. Their communication ended when Shadowcat tackled Rogue in an attempt to prove that she was not weak, contrary to what Wolverine had said of her earlier.

While Nightcrawler tried to intervene with the two, Rogue touched his face and absorbed his powers before using them on accident to teleport. She teleported around numerous times and learned that she could speak German after having absorbed the language from Nightcrawler, but was dismayed after having fell. Jean Grey tried to speak to her, and gave her a communicator after Rogue identified her. Recognizing Storm from when Mystique attacked her using her form, she fled and encountered Mystique as both Cyclops and Jean right after. While the real Jean tried to help her while unaware of what she had gone through, Rogue tried to get away from her and absorbed Storm's powers once she tried to comfort her.

Gaining her abilities, Rogue flew into the sky and started to summon lightning as Jean and Cyclops tried to get Storm out of a puddle of water to prevent her from being electrocuted. In the midst of her chaos, she teleported using Nightcrawler's powers away from the scene, ending the conflict. After reuniting with Mystique and Destiny, she transferred to Bayville High School. There, she met Mystique in her Principal Darkholme guise and after leaving her office, pulled out the communicator Jean gave her and held onto it tightly.

After transferring to the school, Rogue began to have classes with members of the X-Men, which included Scott. The two were partnered by their teacher to read some Shakespeare dialogue since the two were the only ones without partners. Despite Scott trying to approach her friendly, Rogue exclaimed her resentment in him and his teammates. During lunch, Fred Dukes was messed with over having dropped food on himself and started to get angered by the laughter his classmates were doing.

Rogue was very confrontational, and often clashed with others whenever she found something to disagree about. Her trust for how others used their abilities was non-existent, as she would believe anyone can use their powers and get away with it at the Xavier Mansion. She proved to be seemingly jealous of Jean, specifically over the latter's relationship with Scott and the fact that she was one of Xavier's most trusted students.

Throughout the series, Logan seemed to love Rogue like a daughter. In later seasons Logan was shown to grow close to Rogue especially when helping her in terms of controlling her powers.

Kurt Wagner was Rogue's adoptive brother. Throughout the series, their brother-sister relationship progressed and they became extremely close to each other and were shown to love one another greatly.

Raven was proven to become one of Rogue's worst enemies and biggest rival. Rogue had a lot of built up anger and bitterness towards Mystique for abandoning her as a child and not making an effort to be a mother to her. Despite this, Mystique possibly did love Rogue even though she never made the effort.

Scott was the first person Rogue met who understood what it felt like to not be in control of his powers. As a result, Rogue developed an attraction towards Scott. After meeting Gambit, it was possible the attraction faded while he accepted his feelings for Jean.

After Rogue joined the X-Men and developed an attraction to Scott, her relationship with Jean started to get competitive for Scott's affection. After Scott began dating Jean, Rogue felt isolated and saddened. However, after witnessing Jean's power surge and helping save her, Rogue began understanding that if she were in Jean's position, Jean would have done the exact same thing for her. Jean, as a result, ended up returning the favor when Rogue lost control of her multiple-personality disorder.

Remy was shown to win over Rogue's heart the first time she met him. She was shown to care for him in similar ways he cared for her, despite them being on opposing sides.

When Xavier scanned Apocalypse's mind he saw several visions of the future that included Rogue. In this possible future, Rogue gained the ability to fly and was still with with the X-Men.

Rogue was voiced by Meghan Black.

Rogue was made more goth-like in appearance for the series. Rogue's portrayal in the series as a goth-like person almost made it into the comics. If this event were to have taken place, Rogue possibly would have become the most influential character in the entire series.

Rogue has no known real name. In the comics it was revealed, after the series, that it was Anna Marie with no known surname.

Frank Paur hinted that had the series gone on, Jean would have become Phoenix and then Rogue and Cyclops would become romantically involved. Frank Paur stated that the studio purposely made the scene of the aged X-Men hint at a relationship between Rogue and Cyclops, especially given their standing next to each other. 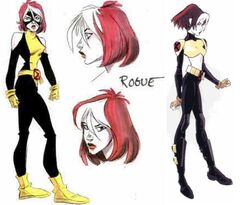 Concept art for an early version of the character showed two different iterations of her costume. Both had much more yellow. One had a mask, bare shoulders, and yellow boots. The other had a large X across her chest, a bare midriff, and black boots.

Retrieved from "https://marvelanimated.fandom.com/wiki/Rogue_(X-Men:_Evolution)?oldid=88225"
Community content is available under CC-BY-SA unless otherwise noted.