Robert Barton Englund (born June 6, 1947) is an American actor, voice actor, television host, and director who played Vulture on The Spectacular Spider-Man, Dormammu on The Super Hero Squad Show, and Pluto on Hulk and the Agents of S.M.A.S.H..

He is best known for his numerous roles in horror films, especially his portrayal of Freddy Krueger in all but one film in the A Nightmare on Elm Street franchise.

Robert is the sun of Clyde Kent Englund, an engineer who helped develop the Lockheed U-2,[1] and Janis (nee McDonald). He was born in Glendale, CA on June 6, 1947. He is of Swedish origin and can speak the language fairly well.

Englund began his studies in acting at the age of twelve. He took classes as Los Angeles' California State University in the children's theatre program. He started to appear in numerous children's plays. When of age he attended the school where he graduated with a Bachelor of Arts in theater. He spent three years at University of California, Los Angeles. He then transferred to the Oakland University in Rochester, MI. During this time he would study at the Meadowbrook Theater at night. Later he attended the American branch of the Royal Academy of Dramatic Art located in Great Britain. He graduated from the Academy with honors.

In 1968 he joined the Actors Equity, a theater union, since he did theater work in New York. He joined the Screen Actors Guild in 1973. He is also a member of American Federation of Television and Radio Artists and the Directors Guild of America.

Englund's first break as an actor was a role in the 1972 Cleveland company production of Godspell. After that he began to appear in many other regional productions. He returned to the Los Angeles area to audition for the film Badlands. Though he did not win the part he stayed in the area and got a part in his first film Buster and Billie.

He continued to act in several other films such as Stay Hungry, Eaten Alive, Galaxy of Terror.

He auditioned for the role of Han Solo in original Star Wars. After failing to get the part he suggested that his friend, Mark Hamill who was sleeping on his couch, try out for a role. Hamill eventually got the part of Luke Skywalker

A Nightmare on Elm Street

Englund rose to prominence in the role of Fred Krueger in the 1984 hit horror film A Nightmare on Elm Street. He continued to play the character in the seven subsequent sequels and television series.

Englund's Kruger is noted among horror fans as being the only slasher film villain at the time that would speak. Whereas most others were strong and silent, Kruger would make jokes and could be beaten up easily by the heroes. Englund is also noted as being the one of the few actors to play the villain throughout the series.

Though criticized by critics and fans alike, Kruger became more prominent with each sequel. He would talk more and be more of the focus of the story.

Kruger would go on to become one of the most recognizable characters in horror alongside Dracula, Frankenstein, Wolf Man, Michael Myers, and Jason Voorhees. The American Film Institute named Kruger as #40 of the Top 100 villains. Premiere magazine named Kruger #51 on their Top 100 villains list.

Englund reteamed with original Nightmare director Wes Craven in Wes Craven's New Nightmare. The sequel was unconventional for the fact that it wasn't a true sequel, but set in the "real world" where Kruger came to life. He not only played himself but a demon who takes the form of Kruger.

His final turn as the character was in the 2003 film Freddy vs. Jason, where his famous Kruger battled against famed slasher villain Jason Voorhees.

His role as Kruger got him the title role in the 1989 film The Phantom of the Opera, whose make-up was similar to Kruger's. England returned to work with Craven for the six-episode series Nightmare Cafe.

He began to be cast in several other villainous roles. In 1990 he played in The Adventures of Ford Fairlane. He played major roles in The Mangler, Night Terrors, and The Paper Brigade.

Because of his prominence in the Nightmare series Englund was cast in the 1997 film Wishmaster, which featured many actors from well-known horror films. He was cast in the horror mockumentary Behind the Mask: The Rise of Leslie Vernon for the same reason. This also caused him to be cast in the webseries Fear Clinic with other horror icons.[2]

He continued playing in several horror films but never to the success of Nightmare. He appeared in Strangeland, Urban Legend, Idle Hands, Python, and Windfall.

In addition to horror-comedies he has played in more comedic roles such as Meet the Deedles and Wish You Were Dead.

He played the MC in the Masters of Horror episode "Dance of the Dead".

Recently he acted in Spanish 3D horror film Web Cam and Inkubus. He appeared in the television series Bones, Chuck, and Supernatural.

He appeared in several documentaries such as Hollywood Don't Surf! and Never Sleep Again: The Elm Street Legacy, which is all about the Nightmare series.

His first purely voice acting role was as the narrator of the film Big Wednesday.

He reprised his role as Kruger, and played Jason Voorhees, in The Simpsons episode "Treehouse of Horror IX".

He later followed "Pryde of the X-Men" actor Michael Bell as the voice of Riddler on The Batman alongside Rino Romano and Kevin Michael Richardson.

Englund was hired by Marvel Animation to voice Vulture on the series The Spectacular Spider-Man, for which he appeared in six episodes. He was later hired to voice Dormammu on The Super Hero Squad Show and Pluto on Hulk and the Agents of S.M.A.S.H..

He played Scarecrow in the video game Injustice 2, coincidentally this was similar to the role he played on Chuck as both used fear-inducing drugs. He was several roles on Regular Show.

Englund was married but later divorced Elizabeth Gardner from September 15, 1968 to January 2, 1986. He later married actress Roxanne Rogers in 1986 but divorced in 1988. On October 1, 1988 he again got married to Nancy Booth, and they are still together. 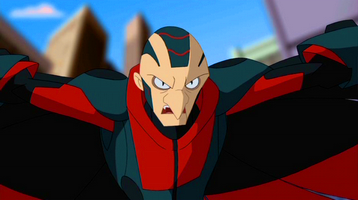 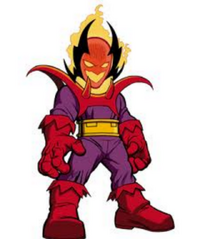 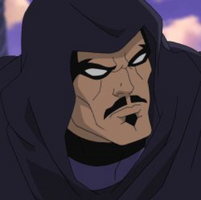 Pluto
Add a photo to this gallery

Retrieved from "https://marvelanimated.fandom.com/wiki/Robert_Englund?oldid=78680"
Community content is available under CC-BY-SA unless otherwise noted.