Richard Fisk is the son of Wilson Fisk and a criminal mastermind in his own right.

Richard is the son of Wilson and Vanessa Fisk.

Richard headed a company named Fisktronics. At some point, a young man named Peter Parker saved his father's life from Hobgoblin. Richard and his father decided to use the young man in a plan to sell secrets to the enemies of their country.

They hired Parker for a job then framed him for treason. Richard learned from Chameleon that Parker's parents, Richard and Mary, were also considered traitors. He had Susan Choi, an officer in his employ, arrest and convict him. Richard then had Chameleon and some of his father's forces kidnap Parker from custody while also framing the superhero Spider-Man (unaware that Peter was Spider-Man). Peter was rescued in the last moment by another superhero named Daredevil. 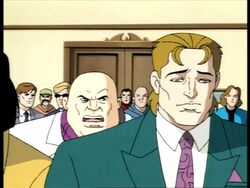 Eventually, the two superheroes stopped Richard and he was arrested. He was put to trial and convicted, though did not name his father in any crime. At the trial, he was told that sacrifices must be made, something Wilson had once told his father.

In prison at Ryker's Island, Richard teamed up with Tombstone. The two then worked to frame Tombstone's childhood friend-turned-enemy Joseph Robertson, who worked with Parker. They had him kidnapped and using a remote-controlled gun framed for orchestrating a robbery. After he was convicted, Robbie was supposed to be sent to New York State Penitentiary but Wilson changed it to Ryker's.

Robbie was sent to his cell and found that Richard and Tombstone were his cellmates. They went to escape, taking Robbie along with them to make him look even more guilty. Spider-Man appeared and stopped the two criminals. Robbie was then cleared of all charges.

Later while in prison, some men attacked Richard because of his father. Hobie Brown saved him. Richard told his father about Hobie and he was released. Hobie became the Prowler, an agent of Kingpin. With Spider-Man's help, he turned against his father.

Richard Fisk is very intelligent and manipulative individual. When he first met Peter, he appeared to be kind, polite, friendly, honest and likeable person. He was apparently grateful to Peter for saving his father's life from Hobgoblin. However, it quickly turned out that Richard's "good" demeanor was nothing more than a facade. Actually Richard was very evil, cunning, deceitful, traitorous, fraudulent, ruthless and malevolent man. He was also very greedy due to the fact that he betrayed his own country for profits. Despite his evil nature, Richard truly loved his father and was always loyal to him.

Tried to take down his father's organization under the names Schemer (a gang leader who tried to compete with Kingpin) and Rose (an agent of Kingpin who tried to betray him). He also became a Punisher-like vigilante under the name Blood Rose.

He was eventually shot and killed by his own mother.