For other uses of Rhino, see Rhino (Disambiguation).

The man known only as Rhino is a mercenary who works for Kingpin and is a member of the Insidious Six.

Mission Control loses contact with the shuttle as it spins wildly out of control. It's off course and heading toward the greater metropolitan area. Peter calls Aunt May telling her to get into the basement. Kingpin is worried but Smythe assures him that it will miss their building and touch down at the George Washington Bridge. Thinking about it, Kingpin calls the Rhino and tells him to go to the bridge.

The shuttle roars over the city just missing Kingpin's hideout, as Smythe predicted. The ooze is now climbing over both John and the co-pilot. John manages to fight the ooze long enough to pilot the shuttle towards the river and it violently crashes on the bridge nearly missing both Rhino and Brock. 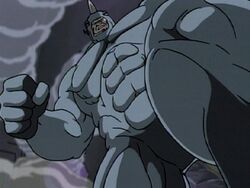 Spider-Man arrives at the shuttle and finds that the door has already been ripped off. Spider-Man finds both the astronauts fine, but knocked out, and a large man dressed in a rhinoceros costume who charges him. Rhino knocks Spider-Man down and nearly crushes him when Kingpin demands that he return immediately. Just before leaving, Spider-Man attaches a Spider-Tracer on Rhino. As he's escaping Brock snaps a few shots of Rhino smashing cars.

Spider-Man rescues the astronauts believing that Jameson will then have to print an article saying that he saved the publisher's son. However, he hears something moving in the shuttle and reenters. He finds nothing and the bridge finally gives way causing the shuttle to crash into river with the wallcrawler trapped inside. Jameson goes down to his son. Before passing out John manages to say "Black, like tar…the bridge…Spider-Man." Jameson wonders what Spider-Man has to do with anything. Brock confronts Jameson and tells him he saw the webslinger steal something from the shuttle and he has the photos to prove it. All Brock wants is his old job. Jameson agrees so that he can finally take down Spider-Man.

Spider-Man climbs out of the river covered in black ooze, thinking it's Hudson River pollution. He attempts to track down Rhino but the signal completely disappears. Rhino actually went into Kingpin's hideout to deliver the Prometheum X. Smythe wants to examine it but Kingpin has a buyer who wants to buy it already.

In their hideout, Smythe tells Kingpin that he needs control rods made of lidium 90 to properly demonstrate the power of Prometheum X and they are unable to get to the one place that has them. Kingpin calls Rhino once again.

At the Parker home, Aunt May once again worries that Peter's job of taking pictures of Spider-Man will put him into danger. She believes that because of the reward Spider-Man will become cornered and aggressive. Peter is tired of it and storms off. In his room Peter's Spider-Tracker picks up the Rhino again.

Rhino storms the government repository that holds the lidium 90 and easily knocks the guards aside. Spider-Man shows up and is more aggressive in both fighting and attitude. Spider-Man demands to know where the Prometheum X is. Rhino refuses and is thrown through several walls. Rhino gives up saying he'd rather go to jail, but Spider-Man has no intention of taking him to jail. Spider-Man's tired of being so friendly and threatens to crush Rhino under a heavy metal door. Seeing Rhino beg for his life, Spidey remembers yelling at Aunt May, threatening Flash, and being warned by Felicia and decides to leave Rhino unharmed.

What he lacks in intelligence, he makes up for with brute strength and a huge horn on the top of his head. Rhino is loyal to Kingpin refusing to reveal any information about his employer to Spider-Man, chosing to suffer prison rather than betray his boss. This loyalty was rewarded when Kingpin offered Rhino a part in his Insidious Six, a team of supervillains he created for the sole purpose of killing Spider-Man. Rhino willingly accepted this offer.

Rhino was voiced by Don Stark. In "The Six Fight Again", Richard Moll voiced him for his one line.

Retrieved from "https://marvelanimated.fandom.com/wiki/Rhino?oldid=89842"
Community content is available under CC-BY-SA unless otherwise noted.