Patricia "Pepper" Potts, also known as Rescue is a friend and ally to Iron Man and War Machine. 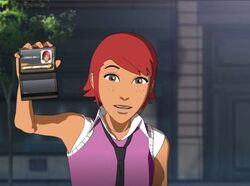 Her father is an Federal Bureau of Investigation agent allowing her access to information on many criminals. She tends to talk a lot, much to the annoyance of her friends and family.

She became Rescue after Tony gave her a new suit of armor.

First adapted version of the character to become Rescue, though it is the first to appear after the comic book version became Rescue.

The series changed her first name from Virginia to Patricia. They then named her father Virgil as a reference to her comic book name.

Called Pepper because of her freckles.

Worked at Stark Industries when she noticed an accounting error that saved the company millions. Tony then made her his personal assistant.

Dated then married Happy Hogan, but eventually broke up.

Has her own arc reactor in her chest when she had shrapnel embedded just like Tony.

Retrieved from "https://marvelanimated.fandom.com/wiki/Rescue_(Iron_Man:_Armored_Adventures)?oldid=88507"
Community content is available under CC-BY-SA unless otherwise noted.