A radioactive zombie was part of a plan by the Mandarin to take over the world.

Off the coast of Norway the Russian submarine Prometheus was sunk by Hypnotia. She planted a Bio-Conversion Device which covered the crew of a strange substance.

Over the next year the ship drifted towards the coast off Scotland while the crew were converted into radioactive zombies. 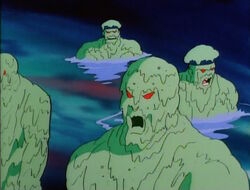 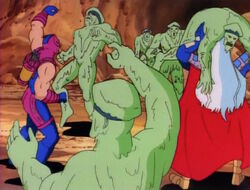 Mandarin's plan was to use the sailors to convert the entire world into an army that he would command. They were radioactive and thus difficult to fight against in close quarters. 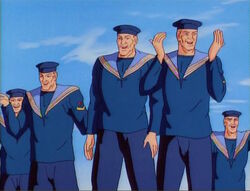 After the battle the zombie crew woke up, left the sub, and attacked the Hammer Channel Tunnel Ribbon Cutting Ceremony. Force Works arrived and did battle with them. Scarlet Witch converted herself into a zombie in order to fight them. The heroes defeated the zombies and Century turned them back to normal.

The radioactive zombies were original to the series.

Retrieved from "https://marvelanimated.fandom.com/wiki/Radioactive_Zombie?oldid=52172"
Community content is available under CC-BY-SA unless otherwise noted.