Elizabeth Braddock, also known as Psylocke, is a mutant.

The early life of Elizabeth Braddock is unknown. At some point, she discovered that she was a mutant with psychic powers and took on the name Psylocke.

At one point she was captured by the Mutant Response Division and rescued by Quicksilver.

When the Brotherhood of Mutants found Nitro, they asked Psylocke help control his powers. They wanted to transport him to Genosha to be used by Magneto. They were confronted by the X-Men and she was stopped by Emma Frost. 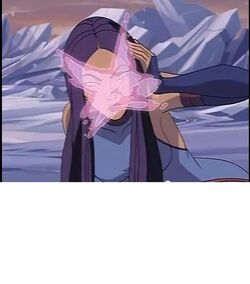 Due to being a psychic, Psylocke is able to listen to other people's thought. She can also fire psychic "bolts." She presents a butterfly-shaped energy aura whenever she is using her powers.

Psylocke was voiced by Grey DeLisle.

This version of Pyslocke has the comic's second body but the first body's powers.

She has been a member of the X-Men.

Retrieved from "https://marvelanimated.fandom.com/wiki/Psylocke_(Yost_Universe)?oldid=85085"
Community content is available under CC-BY-SA unless otherwise noted.