The Prometheus was a submarine deployed by the Russian military.

Little is known about the history of the Prometheus.

At some point, the Prometheus was traveling off the coast of Norway deep under the ocean. It was being tracked by a United States military post who just noticed strange readings. 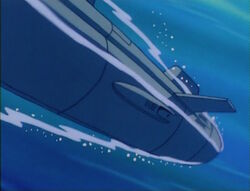 Unbeknownst to the Prometheus Crew the super villain Hypnotia snuck aboard and planted a Bio-Conversion Device. Captain Gletkin noticed strange readings and found the hidden woman. She incapacitated them and covered the entire crew in a strange substance. She then used a laser to cut a hole in the hull and sank the sub.

The sub drifted towards the coast of Scotland where it sank and set on the bottom of the ocean. It sat there for a year while the crew were converted into radioactive zombies. 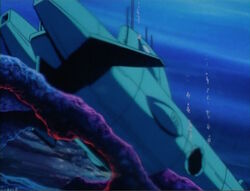 After the battle the zombie crew woke up, left the sub, and attacked the Hammer Channel Tunnel Ribbon Cutting Ceremony. Force Works defeated the zombies and Century turned them back to normal.

The final fate of the Prometheus is unknown. Presumably, it was left on the ocean bottom.

The Prometheus is original to the series.

The ship is not based on any actual design used by the Russian or Soviet Navy.

The submarine was named after the ancient Greek myth of Prometheus, who stole fire from the gods and gave it to man. Prometheus was credited, and blamed for, playing a pivotal role in the early history of humankind, similar to the sub's pivotal role in Iron Man's and Mandarin's history.

Retrieved from "https://marvelanimated.fandom.com/wiki/Prometheus?oldid=75728"
Community content is available under CC-BY-SA unless otherwise noted.