Charles Xavier, also known as Professor X, is a powerful telepathic mutant and leader of the X-Men.

Charles comes from a long line of Xaviers, coming all the way from England, which all share a strong family resemblance. His ancestor James Xavier knew Charles Darwin and Nathaniel Essex. James found that Essex was obsessed with human evolution and believed that humanity would continue to evolve. He began performing inhuman experiments and James led the charge to have him captured. He lost Essex after stopping Jack the Ripper. However, Essex survived to continue his tests. 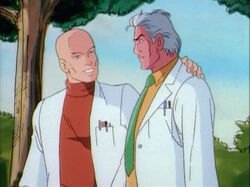 Charles Xavier was born into a wealthy family in Westchester, New York. The family occupied the sprawling Xavier Mansion.

At some point in his early life, Charles's father died and his mother remarried Kurt Marko. As a result of this marriage, Charles gained a stepbrother in Cain Marko, later to be known as Juggernaut. Unknown to Charles or his mother, his stepfather had only married his mother for her vast wealth not out of love. His stepfather favored Charles over Cain and sent Cain to military school to keep him out of the way. He was also abusive to Cain. This was something Charles felt with his fledgling powers and that he could not fully understand. This caused a rift between Charles and Cain that has never been healed. Indeed, later in life when he gained the powers of the Juggernaut he tried on numerous occasions to kill his stepbrother. 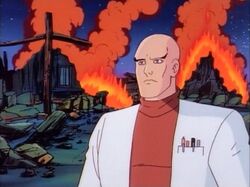 When he entered his college years, Charles would study the sciences and medicine, acquiring at least one doctoral degree if not more. Additionally, while in college he would have a glimpse of the adventures to come when he was visited by time traveling alternate versions of Storm and Wolverine as well as Bishop.

After he finished college, Charles either enlisted or was drafted into the U.S. Army and served a tour of duty in Europe. Details of his military service have never been made clear. However, it is known that during these adventures that he met and fell in love with Moira McTaggart to whom he proposed marriage. In the end, she refused his proposal but the two would remain close friends and confidants in the years to come. As Dr. McTaggart herself, would describe her relationship with Charles "he has given everything for his work, for his students; his X-Men as for friends I am the only one he has". After his service in the military was completed, it is known that he traveled the world extensively as a solo adventurer for several years.

During his adventures, he met Magneto for the first time when they both worked in the treatment ward of a small hospital in the small Eastern European country where Magneto was from treating those that they could with their powers. The two men became friends and disclosed to each other the nature of their powers. These events would seem to suggest that Charles has extensive medical training and practical experience to safely diagnose and treat someone successfully; he may even be a fully trained medical doctor although this has never been disclosed. Matters came to a head for Charles and Magneto when small pockets of rebel soldiers tried to retake the country even after the war ended. They used their powers, to defend their patients. Beyond that, Magneto advocated the use of violence as a tool for mutants to gain acceptance whereas Charles wanted to work towards peaceful coexistence between humans and mutants. Charles even stopped Magneto with his mental powers.

Strangely enough, the two men would remain friends and occasional allies over the years that followed even though their philosophies were radically different. The two men fought at each other's side during their adventures in the Savage Land. Even after Magneto was believed to have died on Asteroid M Charles was deeply affected by this and very relived to find out that he had not died. Charles also traveled to Egypt where he crossed paths with Shadow King after a young Storm picked his pocket Charles pursued her he met the Shadow King in human form. Shadow King was using the children of Cairo, Egypt to steal for him. It is known that Charles faced Shadow King on the astral plane and beat him back. After this, Charles lost the ability to walk.

After this, Charles went to India to undergo rehabilitation for his paralysis. Here, he met and became romantically involved with his nurse Amelia Voght. After his rehabilitation was complete, he returned to America with Amelia and formed the X-Men. In the long term however, Charles's devotion to his work drove Amelia away from him. In the years that followed, Charles would train and work with a variety of students and the roster of the X-Men would change dramatically to include Rogue and Gambit but would see the loss of Iceman and Lorna Dane.

When his X-Men brought home a girl named Jubilee after saving her, Xavier told them to not let her leave after she tried to escape. Xavier's ambition to help others drove him to recruit her on the team as well as mourn the loss of Morph, an X-Men previously dying shortly before Jubilee was inducted into the team.

The X-Men would have numerous adventures from matters involving Sentinels to the mission involving the Shi'ar and the M'Kraan Crystal. It was on this mission that he met and fell in love with Lilandra the Empress of the Shi'ar.

When Jean Grey became possessed by the Phoenix Force, Xavier's subconscious turned on the X-Men and began tormenting them. Xavier's conscious regain controlled and stopped.

Xavier has strong telepathic abilities which allow him to read minds and project thoughts..

When casting Xavier, the producers had in mind a voice like Leonard Nimoy, Fredric March, and a non-comic Leslie Nielsen.[1]

The hoverchair used by Xavier in both series was the one he was using in the comics at the time. It was actually given to him by Lilandra.

In an apparent inconsistency, in "Enter Magneto" Xavier beats Magneto and remains standing, and Magneto does not reappear until the episode. However, in "Sanctuary, Part One" Beast states that Magneto was the one who paralyzed Xavier. It is never stated if there was another battle or if Xavier was hurt during the battle making the inconsistency.

It is possible that there was another battle and Xavier's dialogue in "Enter Magneto" was not fully revealing as Iceman was shown battling Magneto in "Cold Comfort".

It was an alien calling itself Lucifer that paralyzed Xavier. At one point Lilandra cured his paralysis but Magneto eventually paralyzed him again.