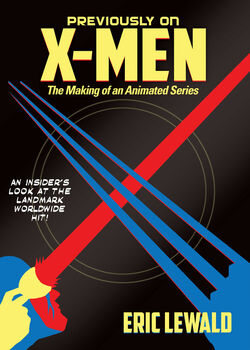 Previously on X-Men: The Making of an Animated Series is a book by Eric Lewald, with help from his wife Julia, on the making of X-Men. The book was released on November 1, 2017, just one day after the twenty-fifth anniversary of the premiere of the series. It was published by Jacob Brown Media Group.

Julia convinced Eric to write the book after pointing out how beloved and influential the series had become. They worried that with 20th Century Fox owning the X-Men and Fantastic Four and Marvel Entertainment/The Walt Disney Company owning most of the rest, that no one was celebrating the popular show and that it had no home. They compared X-Men to the child of an angry divorce, as Marvel had sold the rights during their bankruptcy problems. They felt that if anyone was going to celebrate the series they should be the ones as they worked on it. Preparing for the twenty-fifth anniversary gave them a deadline to work within.

Charlotte Fullerton provided the artwork for the book as she had kept the original digibeta of almost six hours of Fox Kids promotional materials. Due to rights issues, Marvel did not participate in the book nor would they allow screenshots from the series. The promotional materials are considered fair use.

Will Meugniot designed the cover.[1]

Cathal J. Dodd, voice of Wolverine, and Alyson Court, voice of Jubilee, delivered a signed copy to Canadian prime minister Justin Trudeau, who admitted to being a fan of the series.[2][3][4]

The book was the top selling New Release on Amazon.[5]

Michael S. Mammano of Den of Geek gave the book a five star rating. He was a big fan of the series when it originally aired and loved when the series came out on DVD. However, he noted that they were shamefully lacking in bonus features. He liked that all the episodes were available in a crips and clear presentation. However, there was nothing else like commentaries, behind-the-scenes featurettes, or anything else to add to the experience. He felt the book was exactly what the DVDs were missing. He calls the book the only extra feature fans of the series will need. He noted it provides an in-depth look at every aspect of the making of the series. He also noted it did not hold back on naming names or feelings towards certain figures, even towards Stan Lee. He felt it was actually about a family of filmmakers who came together, staking their careers on the series, and becoming a legend in the medium. He called it a page-turner saying he read nearly the first half in one sitting. He liked the depth of the content. He praised how it was presented saying that in lesser hands it would be incredibly dry. He called the subject matter story and the book compelling, funny, weird, and moving. "You can feel all the love and dedication that these people put into X-Men: The Animated Series and what a blast they had making it. And it makes one almost as proud to have shared in that journey by reading about it as they are to have lived it."[6]

Michael Harris of Retro Zap felt the series was one of the best animated works over the last few decades, perfectly capturing the look and feel of the comics. He claimed that the book has everything a fan of the show would want. He noted how rare it is for such a detailed book about an animated property. He enjoyed how it was written by the series' showrunner as it gave the book a personal feel, as opposed to other Making Of works made by mere observers. He noted how detailed the book was from the beginnings of the series to its completion. He felt that not only would fans appreciate it but those interested in the animation industry. He claimed the best part was the chapter on the filmography. He liked that it was more than just a recap but also went into the background decisions, what was left out, and why. He also enjoyed the chapter on Beast looking at his literary quotes and why they were used. He was fascinated by the modern day interviews with the cast and crew. He found the interview with the late Len Wein to be remarkable and touching, finding it a fitting tribute to his legacy. "On this twenty-fifth anniversary of the amazing series, there's no better way to celebrate it and its creators than by picking up the amazingly detailed and well crafted Previously on X-Men: The Making of an Animated Series. Again, it's not just for fans of the X-Men, but also for fans of the process."[7]

Retrieved from "https://marvelanimated.fandom.com/wiki/Previously_on_X-Men:_The_Making_of_an_Animated_Series_(Book)?oldid=67619"
Community content is available under CC-BY-SA unless otherwise noted.