Peter Parker is from the Non MAU film Spider-Man: Into the Spider-Verse.

Peter Parker was a superhero known as Spider-Man.

Peter Parker was bitten by a radioactive spider at a young age, and after losing his Uncle Ben to a crime he could've prevented, he became the superhero known as Spider-Man.

In the years since becoming Spider-Man, Peter became a celebrity of sorts due to his heroics and the hope he inspired in people. Though his identity was not known, Spider-Man had merchandise, food, and even a Christmas album in his name and image.

During one battle with Green Goblin, Peter saved a young Miles Morales. It quickly became apparent that, like Peter, Miles was developing spider powers. Peter offered to take Miles under his wing and help him control his abilities, and told him to wait where it was safe while he finished destroying the Super Collider, a mysterious device the Goblin appeared to be protecting. Unfortunately, Peter was halted by an attack from The Prowler and the arrival of The Kingpin, who explained that he was plotting to use the Super Collider to open gateways to other dimensions. During the ensuing battle the Collider was activated and an enraged Green Goblin attempted to kill Peter by shoving him directly into the device, overloading it and causing it to explode.

The explosion killed Green Goblin and left Peter severely injured. Miles Morales approached him, and Peter gave him a USB stick that could destroy the Collider. Miles fled and hid upon Peter's request, and the Kingpin arrived alongside Prowler. Peter revealed that he knew what Kingpin was planning and that it wouldn't work, adding that "they're gone". This enraged Kingpin, who brutally killed Peter on the spot. 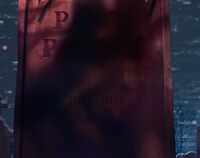 The news of Spider-Man's death and identity broke to the city later that night, though Kingpin's involvement was not known. A heartbroken city attended a eulogy delivered by Peter's wife, Mary Jane Parker, while wearing Spider-Man masks to show respect.

Peter's words and acts of heroism later inspired the young Miles Morales to take up the mantle himself.

The Peter Parker of another universe arrived in this one and helped train Miles.

In another universe, Peter is a superhero in a noir-like world.

There's another universe where Peter is a pig-creature.

In yet another universe, his counterpart is a young girl named Peni.

Peter is voiced by Chris Pine.

This is the first version of Peter to apparently be naturally blonde instead of being brown haired. This is a reference to Ben Reilly/Scarlet Spider, a clone of Peter who dyed his hair.

The post credits scene for Venom, features Miles going to Peter Parker's grave, knocking out the other Peter, and trying to escape the police with the second Peter's unconscious body. It was proceeded with the title card "Meanwhile, in another universe..." indicating that the two movies may exist in the same multiverse.

Retrieved from "https://marvelanimated.fandom.com/wiki/Peter_Parker_(Sony_Universe)?oldid=75632"
Community content is available under CC-BY-SA unless otherwise noted.