Pepper Potts is from the Non MAU series The Marvel Super Heroes.

Pepper Potts is an assistant to Tony Stark.

Pepper had a crush on Tony Stark and often dreamed of marrying him.

When Jack Frost broke into Stark Enterprises he froze Pepper in a block of ice. However, Iron Man thawed Pepper out after her defeated Jack Frost.

When Black Widow manipulated Hawkeye into fighting Iron Man, Hawkeye kidnapped Pepper to lure Iron Man into a trap. However, Hawkeye let Pepper go when he learned that Black Widow was in danger.

When Iron Man was fighting the Black Knight, his armor lost power. Iron Man sent out a distress signal that was received by Pepper. Pepper was able to locate Iron Man and get him back to Stark Enterprises. 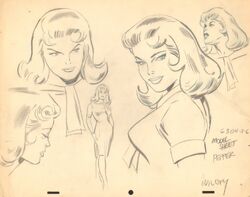 She was designed by Doug Wildey.

Retrieved from "https://marvelanimated.fandom.com/wiki/Pepper_Potts_(The_Marvel_Super_Heroes)?oldid=96371"
Community content is available under CC-BY-SA unless otherwise noted.