Owl is one of the biggest crimelords in New York City.

Little is known about the life of the man known only as Owl.

For some reason his eyes are pure white. 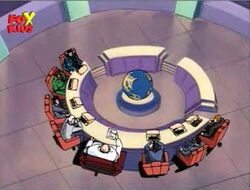 Somehow he managed to move up in the criminal underground. So much that he became one of the biggest names and was part of a special group headed by the Kingpin of Crime.

He was invited to a meeting among the crimelords held by Kingpin and attended by himself, Silvermane, Hammerhead, and several other crimelords. The meeting was held in a mutual location in a large skyscrapper with a dome on top. Despite this, Kingpin was still at the head of the table surrounded by the others and it was he who hosted the event. 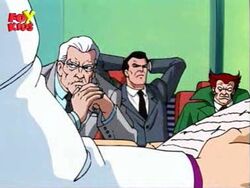 Owl and the others were sitting around a round table. They listened as Kingpin explained that their collective criminal empires had received record-breaking incomes.

However, Silvermane interrupted pressing a button that trapped the criminal giant. Silvermane started a video saying that the superhero Spider-Man was interfering with their operations. 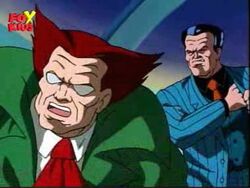 Owl and Hammerhead were shocked when Kingpin suddenly broke out of his restraints.

Kingpin stood and told them all that he was undergoing an operation to rid the world of the Spider-Man once and for all.

Soon after Kingpin broke Chameleon, Mysterio, Scorpion, Shocker, Rhino, and Doctor Octopus out of Ryker's Island forming the Insidious Six. However, Kingpin and Silvermane began a war between the two that lasted several months.

It is unknown what happened to Owl during this war and afterwards.

This is the first version of the character outside the comics and currently the only animated version.

He appeared in the non-canonical and loosely connected 1995 video game. In the game, Owl was incarcerated at Ravencroft Asylum for the Criminally Insane and escaped but was the first defeated by Spider-Man.

His full name is Leland Owlsley.

He was a successful banker known as the Owl of Wall Street until the Internal Revenue Service went after him for tax evasion and crooked deals. Rather than fight the charges he became a crimelord.

He has increased strength, durability, reflexes, sight, and hearing, can glide short distances, has fangs and talons, and is a genius.

Owl is mostly an enemy of Daredevil, Spider-Man, and Black Cat.

He captured Daredevil and intended to kill him to prove his criminal worth but lost in a hand-to-hand battle.

In his second battle with Daredevil, the hero was saved by Black Widow.

While in Chicago, he fought Tigra.

He fought with Doctor Octopus over control of Kingpin's empire.

He was recruited by Doctor Doom to fight the Fantastic Four.

Retrieved from "https://marvelanimated.fandom.com/wiki/Owl?oldid=76214"
Community content is available under CC-BY-SA unless otherwise noted.