OsCorp Industries, often called simply OsCorp, is a weapons manufacturer comparable to Stark Enterprises. It is based near New York City. OsCorp was founded by the Osborn family and was eventually run by Norman Osborn who wanted to pass it onto his son Harry. 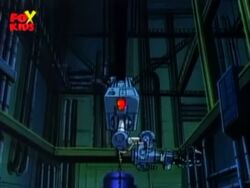 While on the surface Oscorp was a legitimate business, behind closed doors there were many other things going on. Norman hired Spencer Smythe to build a giant robot in order to capture Spider-Man in exchange for a hoverchair for his crippled son. 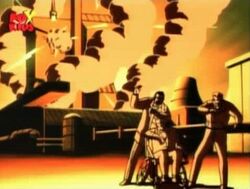 OsCorp was destroyed during the battle between Spider-Man and the Black Widow. The Black Widow had captured Flash Thompson who it thought was the hero. The real one arrived and a battle ensued. Osborn activated a Spider Seeker to destroy the hero but instead started a fire. He then made Spencer Smythe stay to defeat the hero. The robot was destroyed and Spencer was seemingly caught in the explosion. Afterwards Spencer's son Alistair looked over the smoking ruins as he was recruited by Kingpin.

Norman would later create and support the Hobgoblin in order to defeat Kingpin. Later Norman and Kingpin would put away their differences and work with each other. After another explosion, Norman would use altered Hobgoblin resources so he could become the villain Green Goblin.

Following the disappearance of Norman and the incarceration of Harry, it is unknown just what became of Oscorp.