Olivia Octavius is from the Non MAU film Spider-Man: Into the Spider-Verse.

Olivia Octavius, also known as Doctor Octopus, was a supervillain and scientist working at Alchemax.

Little is known about the early life of Olivia. Presumably she is related to Otto Octavius, the other Doctor Octopus, though it is unknown how.

Olivia worked for Kingpin. Kingpin hired Olivia to build a portal device to other dimensions so Kingpin could get his deceased family back.

The Spider-Man succeeded in stopping the portal device from destroying the multiverse. Olivia attempted to stop them but was hit by a truck that flew out of the dimensional portal and was presumably killed. 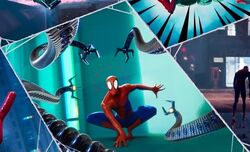 While Doctor Octopus appears in several alternate universes, they all appear to be the Otto version with this being the only female version.

Olivia is voiced by Kathryn Hahn.

Olivia is an original character. This is the first animated version to feature a female variation of Doctor Octopus.

Retrieved from "https://marvelanimated.fandom.com/wiki/Olivia_Octavius_(Sony_Universe)?oldid=89150"
Community content is available under CC-BY-SA unless otherwise noted.