For other uses of Nova, see Nova (Disambiguation).

Nova, formerly Frankie Raye, was the Herald of Galactus after Silver Surfer and Terrax.

When she was young she accidentally wandered into her father's laboratory. She spilled some chemicals on her that were meant for the original Human Torch. She burst into flames but they did not hurt her. She then suppressed his memory for years. 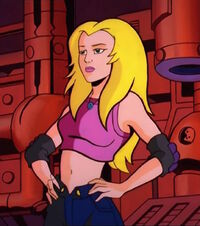 She grew up and had a friend named Amber. They would roller skate together on the beach.

Frankie went to a signing by the Fantastic Four and met Johnny Storm, who she had a crush on. She suddenly burst into flames and the two started a relationship. Mister Fantastic viewed her memories of the laboratory. 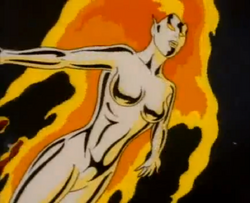 Frankie was with the four heroes when Terrax took New York City into space. Galactus stopped him and killed his herald. However, he was weak and needed to feed. He began to attack the planet. Silver Surfer tried to save the planet and Thor and Ghost Rider stopped the planet eater. Frankie begged the heroes to help the cosmic being since he was a being who needed to survive. Galactus recognized that she had special powers, possibly being a mutant, and made her his new herald, Nova. Nova went into space leaving Amber and Johnny behind.

She met the former herald, the Silver Surfer, after he had escaped Earth. The two became good friends and allies. She asked for his help when Galactus grew sick and nearly died. She tried to help Surfer find his home planet of Zenn-La. She was with her master when Thanos reversed time and destroyed the universe.

Nova was voiced by Leeza Miller McGee on Fantastic Four and Tara Rosling on Silver Surfer.

On Fantastic Four she was designed to be naked while on Silver Surfer she appears to be wearing a swimsuit, the opposite of Silver Surfer.

Frankie was Johnny's girlfriend for some time and used the name Human Torch before she became Galactus' herald.