Jean-Paul Beaubier, also known as Northstar, is a French-Canadian mutant. He is a member of Alpha Flight along with his sister Aurora. 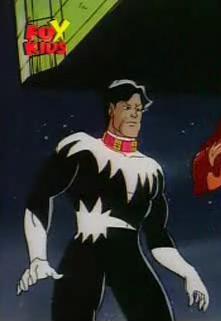 Northstar was among the prisoners of the island nation of Genosha. He, along with many other mutants, provided slave labor for the government using their mutant skills for such tasks as building dams and the like. They wore special collars that restrict them from using their powers to escape and sleep in prison-like cells. They eventually escaped Genosha with the help of the X-Men and Cable.

Northstar was voiced by Rene Lemiux.

This is the first version of the character outside the comics and currently the only version seen in animation.

Does not need his sister to generate light.

Northstar is a homosexual.

Has joined the X-Men.

Retrieved from "https://marvelanimated.fandom.com/wiki/Northstar?oldid=39372"
Community content is available under CC-BY-SA unless otherwise noted.