The Neogenic Recombinator is a device designed at Empire State University that can alter the genetic structure of its targets. It was responsible for the creation of Spider-Man, Lizard, Scorpion, and Michael Morbius' vampire state.

The Neogenic Recombinator was designed by Dr. Farley Stillwell and built at Empire State University.

One day, a group of high school students came to ESU for a demonstration. A spider dropped into the beam and became radioactive. It bit student Peter Parker and gave him superpowers.

Curt Connors used the Recombinator on a lizard then on himself to get his arm back. However, the process turned him into the Lizard. He was cured, but poured the mutated blood down the drain.

Later, J. Jonah Jameson had Stillwell use the Recombinator on Mac Gargan to turn him into Scorpion. 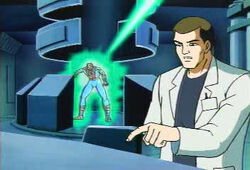 Michael Morbius used the Recombinator to test Peter's DNA. A bat drank the blood, became radioactive, and bit Morbius on the hand. This turned him into a vampire-like creature.

Mirium then took the Recombinator to create a race of vampires, but was stopped by Blade.

The recombinator was created for the series.

The spider that bit Peter Parker was radioactive from a nuclear waste demonstration that he attended.

Gargan was given simply a scorpion-based serum to become Scorpion.

Morbius suffered from a rare blood disease for which he used a serum, one he developed as a biochemist, using vampire bats and electroshocks that turned him into a pseudo-vampire.