National Aeronautics and Space Administration is from the Non MAU series Spider-Man: The New Animated Series.

The National Aeronautics and Space Administration, or NASA for short, is a government agency involved in advanced scientific research.

At some point, a man named Lewis Wyler began working for them. He was on a project to build a prototype A/R Spacesuit. The suit would allow the wearer to pull and push objects away from them as well as moving at high speeds.

The scientific community did not believe in Wyler's theories. The government called his ideas a hoax. After it was discovered that he was stealing from the firm he worked for he was fired. 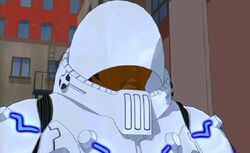 Wyler then began a life of crime and built the A/R suit, ultimately proving his theories correct. He began stealing using the suit under the name Turbo Jet until he was defeated by Spider-Man.

Retrieved from "https://marvelanimated.fandom.com/wiki/National_Aeronautics_and_Space_Administration_(Spider-Man:_The_New_Animated_Series)?oldid=40907"
Community content is available under CC-BY-SA unless otherwise noted.