Mystique is from the Yost Universe series Wolverine and the X-Men.

Mystique is a mutant who has been a part of both Team X and the Acolytes.

The early life of Mystique is unknown.

At some point, she was part of Team X along with Wolverine where the two were possibly lovers. When Weapon X threatened to take her, Logan sacrificed himself to distract Sabretooth so that she may flee.

She later found herself on Genosha as one of the Acolytes under Magneto. He sent her to spy on the X-Men.

She infiltrated a Mutant Response Division and knocked out Dr. Kavita Rao in order to find Tildie Soames.

Despite their recent history, Mystique teamed up with Wolverine to rescue Christie Nord and her father from Weapon X.

She then impersonated Senator Robert Kelly as part of Magneto's plans to have the Sentinels attack Genosha.

Mystique was voiced by Tamara Bernier. 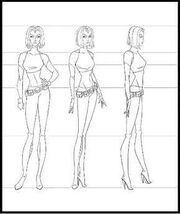 Concept art was created for the proposed second season of Wolverine and the X-Men featuring her, Havok, and Magik.

The name she uses is Raven Darkholme.

It is implied she is a very old mutant, possibly as old as Wolverine. Her shapeshifting ability is able to heal her keeping her young looking.

She has had a child with Sabretooth named Graydon Creed.

She is the mother of Nightcrawler and foster mother to Rogue.

She is not usually associated with Magneto, though they have both started their own Brotherhood of Mutants groups.

She has joined the X-Men.

Retrieved from "https://marvelanimated.fandom.com/wiki/Mystique_(Yost_Universe)?oldid=67226"
Community content is available under CC-BY-SA unless otherwise noted.