Mysterio is from the Non MAU series Spider-Man. 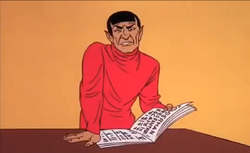 Mysterio disguised himself as Spider-Man and framed him for a robbery. Mysterio then contacted J. Jonah Jameson and said that he would get rid of Spider-Man if he paid him. Spider-Man fought Mysterio on top of the Brooklyn Bridge but lost. Spider-Man soon learned that Mysterio was a special effects expert for a movie studio and went to confront him. While Spider-Man fought Mysyerio, he was able to record Mysterio confessing to framing him for those robberies getting the evidence he needed to clear his name. Spider-Man then defeated Mysterio and left him for the police.

When Mysterio learned there was a gold mine located off the coast he plotted to scare the townspeople away so he could steal it. Mysterio cast a hologram of the Flying Dutchman over the sea hoping that it would scare the townspeople away. When J. Jonah Jameson learned of the Flying Dutchman sightings he sent Peter Parker to get pictures. However, Spider-Man discovered Mysterio's plan and captured him. 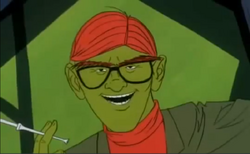 Mysterio later returned and captured Spider-Man. Mysterio used his illusions to make it appear that he was now a giant. Mysterio then tried to kill Spider-Man. However, Spider-Man soon learned that Mysterio was only projecting a giant hologram of himself. Spider-Man then found the real Mysterio and captured him.

Mysterio was voiced by Chris Wiggins.

In "The Menace of Mysterio", one of Mysterio's co-workers at the movie studio calls him "Joe". In the comics, Mysterio's real name is Quentin Beck. It's possible the co-worker used a generic name as a nickname, though the name Quentin is never otherwise established.

Also in the episode, Mysterio without his costume heavily resembles Spock. Star Trek premiered the year prior to Spider-Man.

Retrieved from "https://marvelanimated.fandom.com/wiki/Mysterio_(Spider-Man_(1967))?oldid=85603"
Community content is available under CC-BY-SA unless otherwise noted.