Reed Richards, also known as Mister Fantastic, is a brilliant scientist. As a superhero he fights crime with the Fantastic Four. 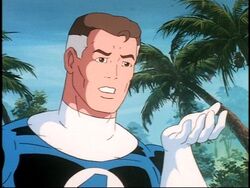 Reed is best friends with Thing. He married Invisible Woman, who had a brother Human Torch. Reed was the reason they went into space where the Silver Surfer mutated their DNA. He felt sorry for turning Ben into Thing and tried to cure him. Together, they fought Galactus, Doctor Doom, Puppet Master, and the Frightful Four. He tried to cure Bruce Banner of the Hulk, but was unsuccessful. Spider-Man called Reed and the other Fantastic Four to a far away planet to fight in the Secret Wars. Doctor Doom cured himself and Ben, but took the Beyonder's powers. After they won, the Beyonder erased their memories. At some point, he created nanotechnology that could form into a suit. Spider-Man "borrowed" that technology for a new suit after his original suit was destroyed.

Mister Fantastic was voiced by Beau Weaver on Fantastic Four and The Incredible Hulk and Cam Clarke on Spider-Man.

He married Sue after receiving his powers, not before.