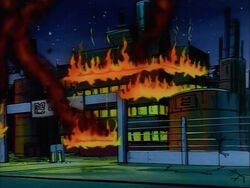 Magneto attacked the site hoping to lure Professor X out of hiding. He attacked the workers, spilled chemicals, and caused the vats to explode. The chemicals then caught on fire. X-Men Cyclops, Rogue, and Storm fell into his trap and were defeated. Xavier himself showed up and defeated his friend turned enemy. All of them escaped before the place fully burned up and subsequently exploded.

The factory was an original location to the series.

Retrieved from "https://marvelanimated.fandom.com/wiki/Metro_Chemical?oldid=56683"
Community content is available under CC-BY-SA unless otherwise noted.