Medusa is an Inhuman and wife to Black Bolt. While suffering from amnesia, she joined the Frightful Four for a brief time.

Medusa fell in love with Black Bolt and the two were married. 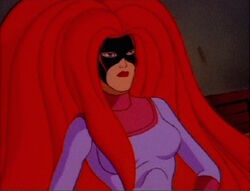 However, at some point she wandered away from Attilan and lost her memory. She then joined the Frightful Four with Wizard, Trapster, and Hydro-Man. They battled the Fantastic Four but were defeated. Human Torch fell in love with her and followed her.

Eventually the other Inhumans found her and brought her back, restoring her memories. Torch followed and went to Attilan where he then fell in love with Crystal. Maximus sealed Attilan from the world trapping the Inhumans in and the Fantastic Four out.

The Inhumans grew afraid as there was limited air and food inside the city. Eventually, Black Bolt used his voice to destroy the barrier freeing them. Crystal then joined the Fantastic Four while the other Inhumans sought a new home.

Medusa was voiced by Iona Morris.

Retrieved from "https://marvelanimated.fandom.com/wiki/Medusa?oldid=61383"
Community content is available under CC-BY-SA unless otherwise noted.