May Parker is the widow of Ben Parker and aunt to the orphan Peter Parker.

May Reilly fell in love and eventually married Ben Parker.

After the death of Ben's brother Richard Parker and his wife Mary, May and Ben took in their son Peter. Unfortunately, the couple were accused of treason. They chose to keep this information from Peter.

Peter grew up as a geek and outcast. One day he became more confident and stronger while no longer needing glasses. He began disappearing without word.

One night, a burglar entered their home and killed Ben. Peter came by later and learned of his uncle's murder, but disappeared soon after. Spider-Man, a wrestler and television personality tracked the killer down and captured him.

At some point, May became good friends with her neighbor Anna Watson. Anna had a niece named Mary Jane and May was always trying to set her up with Peter. Peter was reluctant to go on a blind date but agreed to. He was immediately smitten with her and the two began seriously dating.

For whatever reason, Peter began taking pictures of Spider-Man, who began acting like a vigilante. May disliked the costumed person fearing what the man was capable of. Peter sold his photos to The Daily Bugle to J. Jonah Jameson who also disliked the "hero." She worried that Peter would be in danger by being around the hero and his enemies, though Peter always assured her he was fine.

Peter went off to Empire State University and moved away with his friend Harry Osborn. May went to visit her nephew but they were attacked by Hobgoblin. Luckily, when she awoke all she could remember was the dirty apartment.

Peter once became ill and was taken to a hospital. She was met by a nurse and Dr. Otto Octavius who assured her that he would be fine.

Some time later, Peter disappeared completely. She feared it was part of a string of attacks at ESU where victims had their plasma drained. Peter reappeared apparently fine. However, Peter continued acting strange. 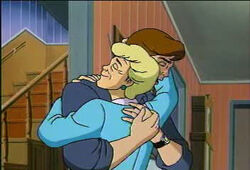 At one point, May met a man about her age who looked a lot like Peter, even wearing similar clothes. She took him in, gave him some clothes and tea, and then saw him off.

Some time later, Peter was accused of treason, just as his parents were. He was put on trial but kidnapped. She had a heart attack upon hearing of his kidnapping. Eventually, evidence surfaced that he was framed and Peter was freed.

Mary Jane Watson was killed in a battle between Spider-Man and Green Goblin. Anna was furious with Peter but May tried to reassure her.

Eventually, Mary Jane reappeared and married Peter. While the wedding was attacked by various supervillains, Black Cat and Spider-Man saved the people and church. 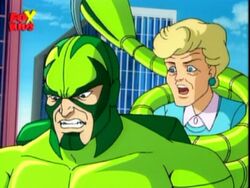 Soon after, Keene Marlow appeared at her door wanting the ring he had given Ben. After Scorpion attacked him, May revealed the truth of Peter's parents to him. Peter went to Russia to clear their name. 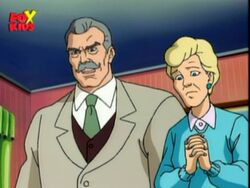 Afterwards, May gave the ring to Marlow knowing how important it was despite Ben's warnings.

Peter then left with Spider-Man to Counter-Earth to help John Jameson against Venom and Carnage. It is unknown if she and Mary Jane ever saw him again.

In a dystopian alternate universe, May Parker had died. This sent Peter into a depression. When he was cloned, Peter greatly resented the new hero.

In a utopian alternate universe, Peter went public as his identity as Spider-Man. He became wealthy and started an enormous company. May was proud of Peter and his engagement to Gwen Stacy.

May Parker was voiced by Linda Gary until her death on October 5, 1995. She was replaced by Julie Bennett.

This is the first animated Aunt May to not have white hair.

Learned of Peter's dual identities after she was captured by criminals and replaced by a genetically-altered actress who died.