Mary Jane Watson is a high school student and good friend to Peter Parker. She bonded with the Carnage Symbiote to become Carnage Queen and later Spider-Woman.

Mary Jane attends Midtown High School along with her friends Peter and Harry Osborn. She expressed an interest in journalism and sought a job with The Daily Bugle.

Mary Jane and Peter tried to have a serious relationship, but things did not work out. They remained friends.

After the Frightful Four attacked their school, Mary Jane wanted to interview Spider-Man when it was rumored that he attended their school.

When Venom attacked Harry's birthday party, Mary Jane went to the roof to cover the story. She wanted to sell the story to the Bugle. She saved Harry from falling off and then helped clean up his penthouse.

She was eventually able to record the battle between Spider-Man, Hulk, and Zzzax. She interviewed with J. Jonah Jameson for an internship with the Bugle but was interrupted by Beetle. 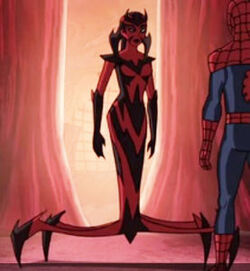 When the Carnage symbiote spread across the city infecting all the people, MJ was also affected. However, it turned her into the Carnage Queen. Spider-Man and his allies defeated her freeing MJ. Afterwards, she learned that Spider-Man was actually her friend Peter. It later turned out that the symbiote was still with her. 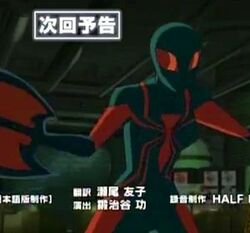 She later used the symbiote to become another version of Spider-Woman.

The first to be based off the Ultimate version rather than 616 version.

Knows that Peter is Spider-Man. This is only hinted at in the series.

For the most part, is Peter's main love interest.

Has expressed an interest in journalism. It is Peter who works at The Daily Bugle.

Was dating Harry when Peter was bitten by the spider.

When Wolverine was in Peter's body, he tried to have sex with Mary Jane.

After Peter's death, she considered writing a tell-all book on Nick Fury. She decided against it when she realized that Fury felt guilty for Peter's death.

Retrieved from "https://marvelanimated.fandom.com/wiki/Mary_Jane_Watson_(Marvel_Universe)?oldid=54789"
Community content is available under CC-BY-SA unless otherwise noted.