Marvel Rising: Secret Warriors is a film from Marvel Animation.

Marvel describes the story as, "When a threat no one could have expected bears down on the Marvel Universe, this ragtag, untrained band of teens have no choice but to rise together and prove to the world that sometimes the difference between a 'hero' and 'misfit' is just in the name."

Marvel Rising is a multi-platform animation franchise that launched in 2018.

Senior Vice President of Animation and Family Entertainment Cort Lane said of the project, "Marvel characters are so relatable because they live in our world and face the same challenges we do. So I’m very excited that our Marvel Rising team of heroes is so inclusive, reflecting characters with different backgrounds, particularly a set of strong female leads that our young audience can connect with."

Director of Content and Character Development Sana Amanat added, "This project is unlike anything we've done before, from featuring the rising and fan-favorite stars of the Marvel Universe, to a visually distinct animation style, this is a groundbreaking animated event. It's an action-packed adventure, full of comedy, heart and powerful messages for every kind of Marvel fan."

The video is traditionally animated.

Lane and the production team sat down with young fans to discuss the kind of stories they would like to see. These conversations ultimately informed the animation, especially in terms of character design.

Lane said, "We're very interested in their opinions and they had a lot to say. One thing many girls were asking for was different body types. In animation, characters all sort of look the same, there are similar body types based on model sheets, but here every female character has a different body from the other characters. They were also very open to the ethnic and religious diversity of the cast."

The different body types changed how each character approached heroism. For example, Ms. Marvel's shapeshifting powers often exploded her body to ridiculous proportions. They felt this was a relatable dynamic for young fans who are going through major body changes. 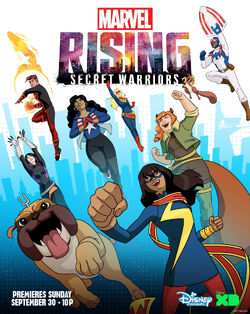 Dove Cameron reprises her role as Gwen Stacy from Ultimate Spider-Man. Her character, commonly referred to as Spider-Gwen, has her name changed from Spider-Woman to Ghost-Spider for unknown reasons. Cameron said of her role, "I see Ghost-Spider as a strong, rough-and-tumble, feminine energy who can face any challenge and become whatever she needs to be to solve the issue in front of her. She's definitely got a sense of humor, and a sass and a lightness to her, but she’s also got a lot of darkness to her, because of her secret that she keeps and her family issues. I think Ghost-Spider deals with a few more issues than her male counterparts, not unlike most young women who deal with some different issues than their male counterparts in normal, everyday life. Some of these might be being underestimated by foes, expectations of what a girl or woman should be, the pressures to shatter those expectations, or the social pressures of the male-dominant job title."

Kathreen Khavari reprises the role of Ms. Marvel from Avengers Assemble. Khavari said of Ms. Marvel, "To have this brown girl who's a Muslim, who's a superhero, who doesn't fall under these stereotypes, [and] is just a good, decent human being who wants to bring that out in other people. I feel really fortunate to be able to portray her."

Milana Vayntrub also plays Squirrel Girl on the live-action series New Warriors. Vayntrub said of Squirrel Girl, "[I] feel like a lot women will feel represented and impassioned by this badass young woman who wants to make the world a better place." She noted that Doreen isn't made to exist for the male gaze and there's more dimension than being a babe."

BooBoo Stewart said of Exile, "To just be a part of this new wave of superheroes and to have women at the forefront of that, I feel like it's great that young kids are just going to grow up with it."[2]

Lane said, "I haven’t seen much in American animation where story is driven by friendships between female superheroes,. Particularly with Kamala and Doreen, it's gonna be especially be a focus of Marvel Rising. Ms. Marvel is a little more tentative, awkward. Doreen is the opposite, full of confidence and extremely unapologetic about being goofy. That puts her in conflict with other characters who are trying to be serious. Every kid feels unapologetically silly, and Doreen gives them license for that."

Marvel Rising's Twitter account announced on July 31st that Skai Jackson was cast as Glory Grant.[3] The next day, they announced that Tara Strong was cast as Mary Jane Watson.[4] Both are members of Gwen Stacy's band The Mary Janes.

C. K. Stewart of Newsarama gave the feature an eight out of ten calling him charming though different from its comic book origins. He did note it was closer to the comics than DC Super Hero Girls. He felt Mairghread Scott wrote a story that would feel familiar enough to comic book fans without alienating new audiences. He praised the anime-style animation calling it a perfect fit for the cast of younger characters, while also praising the designs of the characters. He said the film would leave audiences wanted more, aiming for more of Marvel Studios's Ant-Man feel than Avengers: Infinity War. He called it fun while sneaking in some emotional moments and valuable lessons without being too heavy-handed. He did feel that the film's message about prejudice tripped the film up. He felt there were several odd moments designed to teach a lesson about prejudice that fell flat, claiming the script introduced the concept but allowed it to fizzle out early on. He said there were many potentially smart moments that never pan out, such as Ms. Marvel being accused of being too lenient to another Inhuman.[5]

Meagan Damore of Comic Book Resources said that the film had a few hiccups but would win over Marvel fans young and old. She felt that while geared towards younger audiences adults would find much to enjoy as it was rife with strong themes and obvious morals. She claimed that the film had a sincere approach to its message of acceptance. She praised the way the characters' strong personalities were juggled while not having the illusion that they would always get along calling it refreshingly real and grounded. She felt it was a fluid transition from Marvel Rising: Initiation without the series being required viewing. She did like how it was able to introduce additional characters while still moving and not feeling forced. She felt that all the heroes were dynamic, well rounded, and infused with vibrant life by the voice talent. She claimed America Chavez wwas the standout, noting the film doesn't shy away from her background calling it welcome in a medium that struggles in LGBTQ representation. She said Hala the Accuser was entertaining as a villain but not as well-rounded as the protagonists. She praised Ming-Na Wen's portrayal but felt there wasn't much dimension to her character. She noted there were several obvious discrepancies between Secret Warriors and Initiation, such as Squirrel Girl's eye color. She also felt that the settings were less detailed than in Initiation such as the lack of extras, bland hallways, and boring S.H.I.E.L.D. headquarters. She felt most of the backgrounds were flat and generic, a missed opportunity especially on the alien ships. "With vibrant characters, a heartwarming story and a killer soundtrack, Marvel Rising: Secret Warriors is a joy to watch. In a post-Avengers: Infinity War world, Secret Warriors is like a shot in the arm, brimming with hope and heart. It’s rare to find a project so genuine and candid these days, and Secret Warriors manages to pull this off without feeling cheesy or over-sentimental. Even when the credits roll on the feature, it doesn’t feel like the end — not even close. Instead, Marvel Rising: Secret Warriors feels like the bold beginning of a new era for Marvel Animation."[6] 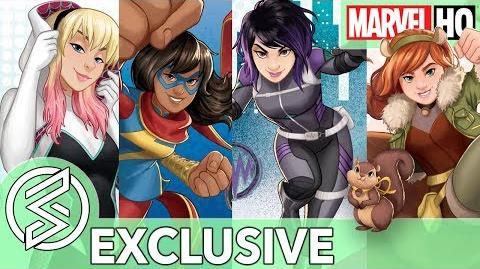 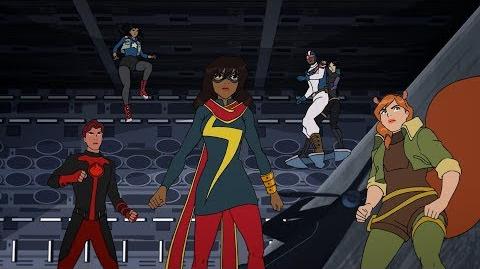 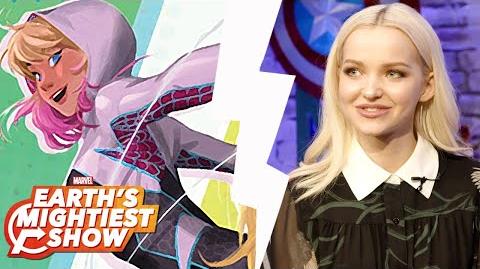