Tony Stark decides to retire as Iron Man and travels to Japan to train a group of pilots to try out the Iron Man Dio Armor as his replacement, as well as supervising the new Arc Reactor that would give Japan free energy. Things begin to fall apart when the Dio Armor is stolen by the organization known as Zodiac. Tony is forced out of retirement to once again wear the Iron Man Armor to defend Japan from Zodiac. Along the way, he must also investigate AIM as well as facing off against his former friend Ho Yinsen. But when he learns that Dr. Chika Tanaka is a Zodiac agent, he discovers a conspiracy to use his technology to make Japan a major military power once again.

Animation was done by the Japanese company Madhouse. The animation is a combination of traditional animation with computer generated imagery. 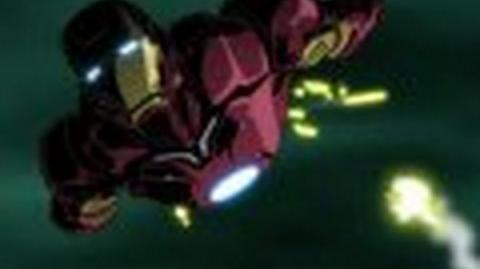 Like the other three Marvel Anime series, Iron Man only lasted twelve episodes.

The visuals in the opening theme song is based off of the film Iron Man 2.

R.L. Shaffer of IGN gave the series a 7 (Good) out of 10. He said that this series and Marvel Anime: X-Men weren't perfect and were flawed in structure and execution. He claimed that neither series succeeded in capturing the magic of the comic books. Though he did feel that Iron Man was more faithful than X-Men and featured less filler with having a better grasp on Tony Stark. The fewer characters left more room for character development and the action was engaging. He felt that while it was flawed the series was more emotional and action packed. He did say the English dub was strong. "The Iron Man Anime is much better than the X-Men Anime, but it's still not a perfect melding of the two mediums – comic books and anime. However, if you're an Iron Man lover, you should definitely consider checking this one out, if only to see how the adaptation came to life under a Japanese eye." [1]

James Harvey of Marvel Animation Age said that while he was not a fan of anime he enjoyed the series. He noted that the series was certainly not perfect but was enjoyable. He enjoyed the mature take on the character that not just focused on action but on the business and political ramifications of his actions. He felt this series was slightly weaker compared to X-Men as it took some obvious breaks with the narrative and gets sidetracked. He did enjoy the finale as it wrapped up the story. He complained that the series had a villain of the week format, though they did factor into the overall story. He did feel that the Wolverine cameo was useless serving no purpose. He did enjoy the voice acting, though felt that Pasdar was too stiff as Tony but fit into the role around the second half. He said the series stayed true to the comic book and had a good story giving fans something to enjoy. "Overall, Iron Man Anime is a worthwhile installment of the Marvel Anime line, despite the hiccups here and there. While the onslaught of somewhat repetitive enemies does get a bit tiresome, the characters and their respective personalities does save it. Toss in some solid animation and voice acting and it’s a fairly good product overall. It does have the tendency to drag or get off-track on occasion, but overall I found it pretty fun, mostly thanks to the enjoyable characters. The best part is...it feels like Iron Man. It brings the characters alive in a respectful manner that no fan should be able to pass up. [...] It’s not the best Marvel Anime product, but it is one that is easily accessible and quick to pick up." [2]

Retrieved from "https://marvelanimated.fandom.com/wiki/Marvel_Anime:_Iron_Man_(TV_Series)?oldid=36108"
Community content is available under CC-BY-SA unless otherwise noted.