Marvel Animated Universe Wiki
Register
Don't have an account?
Sign In
Advertisement
in: Article stubs, Villains, The Hand,
and 3 more

Arnold Brock, better known to the world as Mandarin, is the arch-rival to Iron Man and leader of The Hand. 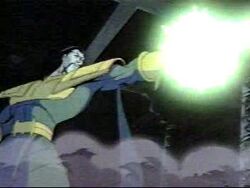 Arnold Brock believed he was destined for great things. As an archaeologist, Brock discovered the remains of an alien cave, belonging to Fin Fang Foom, Brock stole 10 jewels which granted him great power, and transformed his skin green, turning him into the Mandarin. Assembling a large number of supervillains who willingly worked for him, Mandarin wanted to take over the world, as all good green skinned men do. Defeated by Iron Man time and time again, upon dealing with Fin Fang Foom and his dragon brothers, Mandarin unwittingly nearly destroyed the world. He joined Iron Man in defeating the dragons, but lost all 10 of his rings in the process, and left the world believing he was dead. 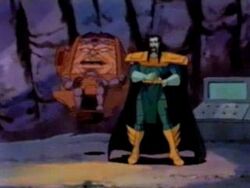 He traveled the world in hopes of finding them and finally succeeded before facing his final confrontation with Iron Man. He created the Heart Of Darkness, which emitted a fog that rendered all technology, including Iron Man’s armor, completely useless. Once defeated in a final battle with Iron Man, he lost his memory, and had his rings, and his hand stolen by mountain bandits.

Mandarin was voiced by Ed Gilbert in the first season and Robert Ito in season two.