Man-Spider was the mutated form of Spider-Man. As explained by Dr. Curt Connors, it was the final stage of Spider-Man's initial genetic mutation. 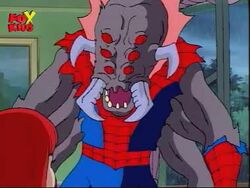 Prior to making its first appearance, the form was hinted and alerted by Dr. Connors when analyzing Spider-Man's DNA after the wall-crawler's battle with the Insidious Six. There, Connors discovered that the process that made him into Spider-Man did not end with him gaining his powers, but was merely the beginning of his transformation, and had been still slowly mutating this entire time. However, as Connors revealed, the mutagenic factor in Spider-Man's DNA had undergone another transformation, and now his mutation had accelerated. While unsure exactly what he was turning into, Connors stated it was clear that what Spider-Man became upon his final transformation, it would not be human.

When Spider-Man's body began to mutate further he sought out the help of Dr. Mariah Crawford who gave him what she believed to be a cure. However, it accelerated the changes and he grew four extra arms, for a total of eight limbs, six arms and two legs. Peter still felt he needed to capture Michael Morbius, and then the Punisher arrived to kill Spider-Man, believing the media. Spider-Man eventually mutated further into a creature dubbed "Man-Spider".

Man-Spider had feelings from Peter but seemed to possess little, if any, of Peter's memories. Man-Spider continued searching for Morbius while fighting the Punisher. Dr. Crawford then asked out her boyfriend Kraven the Hunter to find Man-Spider, who also tangled with Punisher. Punisher was eventually captured by Man-Spider and taken to the World Trade Center parking garage. Kraven followed the mutated hero there and was able to administer another cure, this time reversing the effects. The nightmare was not over however. Spider-Man would have to continually see Dr. Curt Connors to stop the mutation, sometimes the arms would begin to grow again.

Peter continued to deal with the mutation and had to use the Neogenic Recombinator to stop it. Eventually, Vulture used his youth-stealing technology on Spider-Man and accidentally contracted the problem. Vulture began to mutate and sought out Curt Connors and Farley Stillwell. The two restored Spider-Man's youth but left the mutation in Vulture.

Somehow, Vulture seemed to cure himself of the Man-Spider mutation, but then faced another problems where he constantly changed his age.

When Spider-Man went to Counter-Earth, the Knights of Wundagore used Bestial technology to turn Spider-Man into Man-Spider again. He was cured right away.

Man-Spider could shoot acid from its mouth and webbing from every limb without webshooters. His strength was greatly enhanced. He also had the rest of Spider-Man's powers.

Man-Spider is essentially a feral creature. It appears that he lacks higher intelligent functions like speaking. He has some memories from Peter, but they seem relegated to feelings. He goes after Mary Jane apparently on instinct.

Another version has just gotten to the point where he grew the extra arms. Instead of seeing them as a bother, this Spider-Man adapted and made a costume to cover the extra arms and got additional web shooters. When he went to fight Spider-Carnage, he suddenly mutated into Man-Spider and attacked the other Spider-Men, which forced the Beyonder to teleport him away.

Man-Spider was voiced by Jim Cummings.

While Spider-Man did in fact grow four extra arms, he did not mutate into a large spider. It's not until long after the series that he would undergo a similar transformation.