She will always be more known for her roles in the Star Trek franchise and the wife of Star Trek creator Gene Roddenberry from 1969 until his passing in 1991. This association with Roddenberry and his most famous creation has earned Barrett the title "The First Lady of Star Trek."

Barrett was born in Columbus, Ohio. She enrolled in an acting workshop when she was ten years old but later attended the University of Miami in Coral Gables, Florida with the intention of becoming a legal clerk. She attended law school for a year, but, after failing a class in contract law, opted to move to New York to try her luck in acting. She landed parts in several stage plays, including Models by Season and The Solid Gold Cadillac, the latter of which toured across the country for nine months.

Believing the competition in New York to be too stiff, Barrett moved to California in the 1950s where she won parts in stage plays as well as in films. She had a bit part in the 1957 film Will Success Spoil Rock Hunter?, after which she made an uncredited appearance in the 1958 Paramount Pictures release The Black Orchid. She then landed a supporting role in the 1958 Paramount film As Young As We Were. She also had a brief role in Paramount's The Buccaneer that same year.

One of Barrett's earliest television appearance came in 1959 in an episode of the syndicated adventure/drama series Whirlybirds. She then made an uncredited appearance as a waitress in a 1960 episode of Desilu's The Untouchables, which aired on NBC. That same year, she guest-starred on the ABC family comedy series Leave It to Beaver.

In 1961, Barrett was seen in a supporting role in the musical comedy Love in a Goldfish Bowl, another film from Paramount Pictures. This was followed by a supporting role in the 1963 war drama The Quick and the Dead. She also continued making appearances on television shows, including Cain's Hundred and a 1962 episode of Bonanza with her future TOS co-star James Doohan, entitled "Gift of Water".

In 1962, Barrett met actress Lucille Ball at an acting class and was signed to a contract with her company Desilu. Soon thereafter, she appeared with Lucy in an episode Desilu's The Lucy Show.

Barrett first met Gene Roddenberry in late 1963 when she was cast in an episode of his Marine Corps drama, The Lieutenant. Incidentally, the episode in which Barrett appeared, titled "In the Highest Tradition", also featured future Star Trek regular Leonard Nimoy.

In 1964, Roddenberry began developing "The Cage", which became the first of two pilots for Star Trek. Roddenberry selected Barrett, his mistress at the time, to portray Number One, the first officer and helm officer of the Enterprise under Captain Christopher Pike played by Jeffrey Hunter. NBC ultimately rejected "The Cage", but they gave Roddenberry the chance to produce a second pilot. However, the network asked that he drop both the devilish-looking Spock played by Leonard Nimoy and Barrett's Number One character, citing that audiences would never accept a woman being second-in-command of a ship. Roddenberry insisted that Spock be kept but agreed to drop Number One. Barrett jokingly stated that Roddenberry "kept the Vulcan and married the woman, 'cause he didn't think Leonard [Nimoy] would have it the other way around."

Although her character was dropped from the second pilot, "Where No Man Has Gone Before", after Star Trek was picked up as a series, Barrett was given the role of Nurse Christine Chapel. Because the network did not like her role in "The Cage," Barrett donned a blond wig for her role and went by the name "Majel Barrett" rather than "M. Leigh Hudec," as she had done for "The Cage." In total, Barrett was featured as Nurse Chapel in twenty-five of the seventy-nine episodes of Star Trek: The Original Series, from the first season's "The Naked Time" to the last episode of the series, "Turnabout Intruder". She also supplied the voice of the USS Enterprise's computer in several episodes of the series.

Barrett and Gene Roddenberry married on August 6, 1969, two months after the final episode of Star Trek was aired. Since they were both in Japan at the time, and because Roddenberry did not adhere to any particular religion, they decided to have a Shinto-Buddhist wedding. Roddenberry's divorce from Eileen Anita Rexroat had not yet been finalized, requiring the pair to make the marriage legal with a civil ceremony held on December 29, 1969. Their son, Eugene "Rod" Roddenberry, Jr., was born on February 5, 1974.

Barrett and Roddenberry continued working together professionally throughout the 1970s. They both ran the catalog company Lincoln Enterprises, which they founded in 1967. In addition, Barrett acted in many of the unsold TV pilots which Roddenberry wrote and produced, the first of which was Genesis II in 1973.

Barrett voiced Nurse Chapel and numerous other characters, on Star Trek: The Animated Series from 1973 through 1975. Barrett reprised her role of Christine Chapel, now a doctor, in 1979's Star Trek: The Motion Picture. She again played Doctor Chapel in 1984. Barrett then recurred Lwaxana Troi on Star Trek: The Next Generation and Star Trek: Deep Space Nine, appearing in six episodes of the former and three episodes of the latter. Barrett also co-wrote the story for the DS9 episode "The Muse", along with René Echevarria.

On December 10, 2008, it was announced that Barrett had again recorded a voice-over as the Enterprise computer for 2009's Star Trek. She had completed her voice work on the film sometime the previous week. The announcement that she was reprising her role as the computer voice came just eight days before her death.

Following Roddenberry's death, Barrett took material from his archives and used his ideas to develop two Canadian-produced science fiction television series. The first was Earth: Final Conflict, which ran from 1997 through 2002. The second was Andromeda, which aired from 2000 through 2005. Barrett served as executive producers on both of these shows until 2002 and had a recurring role as Julianne Belman on Earth: Final Conflict, but Gene Roddenberry was credited as the creator of both shows.

Despite her commitment to Gene Roddenberry and to Star Trek, Barrett continued acting in unrelated projects. She made an uncredited appearance in the 1965 Paramount film Sylvia, which was followed by a major role in a 1966 musical film called Country Boy. In 1967, she had supporting roles in two films: Gene Kelly's comedy A Guide for the Married Man and the action drama Track of Thunder.

Barrett also continued appearing on television. She made a return visit to Bonanza in 1966, after which she appeared in such shows as The Second Hundred Years and Here Comes the Bride. Barrett portrayed Miss Carrie in Michael Crichton's 1973 science fiction classic Westworld. Barrett then appeared in Stanley Kramer's 1977 film The Domino Principle.

She would appear in the 1979 made-for-TV movie The Suicide's Wife. That same year Barrett appeared in another TV movie, The Man in the Santa Claus Suit. In 1983, Barrett was briefly on the soap opera General Hospital. Barrett appeared in two 1995 independent films: Mommy and Teresa's Tattoo. In 1996, Barrett guest-starred as the widow of the Centauri emperor in the episode of the cult science fiction series Babylon 5 entitled "Point of No Return".

From 1996 through 1998 Barrett would be known to Marvel fans as the voice of Anna Watson, the aunt of Mary Jane Watson, in Spider-Man. She played the character, and her alternate universe counterpart, for a total of seventeen episodes.

As an in-joke, Barrett was brought in by Trekkie writer and producer Seth MacFarlane to participate on his animated series, Family Guy. In the episode called "Emission Impossible", Barrett supplies the voice of Stewie's "sperm" ship, a nod to her four-decade role as a computer voice on Star Trek.

Barrett died at her home in Bel Air, California, at 12:27 AM on December 18, 2008 following a short battle with leukemia. She was surrounded by family friends and her son, Eugene "Rod" Roddenberry, Jr. She was seventy-six years old.

"My mother truly acknowledged and appreciated the fact that 'Star Trek' fans played a vital role in keeping the Roddenberry dream alive for the past forty-two years. It was her love for the fans, and their love in return, that kept her going for so long after my father passed away." 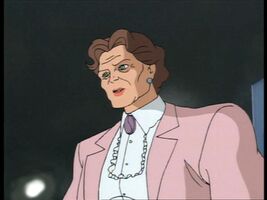 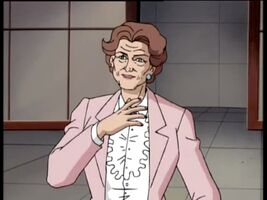