Magneto is from the Yost Universe series Wolverine and the X-Men.

Erik Lehnsherr, also known as Magneto, is a powerful mutant and the leader of Genosha. He led the Acolytes and secretly orchestrated the movements of the Brotherhood of Mutants.

The early history of Erik Lehnsherr is unknown.

At some point in his life, Erik had discovered his mutant powers and formed a friendship with Charles Xavier, which concluded due to their conflicting views about humans and mutants, before becoming Magneto some time later.

At some point later, Magneto had Quicksilver, Scarlet Witch, and Polaris as his children and formed both of the Brotherhood of Mutants and the Acolytes.

At some point later, Magneto had visited the house of Jean Grey, who was living with her parents, and attempted to recruit her. She left with Charles along with one of Charles' students named Scott Summers, who had attempted to help her, and she joined a group of mutants called the X-Men.

Jean used her powers against Magneto through using her telekinesis in order to move the bus from being above Cyclops. Then, she communicated with Scott via telepathy. She told him to open his eyes, Scott did not want to. Jean told him that she would keep him from using his powers. After Scott opened his eyes, Jean suppressed his powers and told him to shoot Magneto.

After Magneto was defeated, he said to Charles that with Jean has more power than he has ever realized. Charles replies through saying that he has been able to suppress her abilities or they would not be having this conversation at that moment. Magneto says that that they would be able to change the world with a mutant who is like Jean. Charles then replies through stating that this is the reason that he will never allow for Magneto to take Jean away. Though, Magneto says that Charles should never say never.

At some point later, Magneto became the leader of Genosha.

The X-Men went to Genosha when Emma Frost detected Professor Xavier. After an attempted "commando raid" by Wolverine and the rest of the X-Men, Magneto stated he found Xavier on the shores of Genosha in a coma. He had been caring for his counterpart ever since.

Later, Nightcrawler arrived in Genosha's fog and the cargo ship was pulled onto the island's shores and the boat was torn open and a ramp was created for the mutants on the ship. Magneto was surprised to see an X-Man on the island, but welcomed Nightcrawler anyway.

Magneto palace was made entirely of metal, making it impossible to infiltrate should someone attempt to do so. Nightcrawler made that observation, but dismissed it. Nightcrawler mentioned that Xavier was still in poor condition and Magneto stated the X-Men were so trusting.

When Nightcrawler discovered Genosha's "prison" system, Magneto defended his actions, stating that some mutants required "re-socialization" which entailed indefinite imprisonment. After a battle, Nightcrawler escaped by teleporting from Genosha to the Institute where Magneto had Mystique waiting for the X-Man's return.

Magneto then gave Quicksilver and his Brotherhood of Mutants a mission. During the transmission, Quicksilver tells his father that if they pull this off, he'd better receive a warm welcome back to Genosha.

Afterwards, Magneto spoke with Senator Robert Kelly about holding back the powerful mutants from being sent to Genosha. He later has his Acolytes raid the MRD prisons to free the mutants.

Quicksilver was not pleased with Magneto when he cuts his Brotherhood of Mutants loose. After a conversation with Quicksilver, he has Scarlet Witch notify the MRD of the Brotherhood's hideout.

Some time after that, Senator Kelly sends Gambit to steal Magneto's helmet. When Gambit gets away without the helmet and Magneto learns of this, he was about to pummel Senator Kelly until intervention by the X-Men prevented this, showing Magneto and Kelly the true horror of the future their actions are creating.

While Kelly listens to reason and agrees to stop the Sentinel program, Magneto refuses to give up on his ambitions and sends Mystique to pose as Senator Kelly in order to unleash the Sentinels on Kenosha and make it appear as though Kelly started the attack.

When the Sentinels attack Genosha, Magneto initially does nothing, claiming that the weak must be sacrificed so the strong can rally together. He then uses his powers to reprogram them to attack humans. He was knocked off his Sentinel by the Phoenix Force yet was rescued by Quicksilver who takes him back to Genosha.

After the Phoenix Force was stopped, Scarlet Witch and Polaris had Blink teleport Magneto and Quicksilver away from Genosha. Finally seeing the corrupt and misguided nature of her father, Scarlet Witch takes control of Genosha with the islanders' full support. Though Scarlet Witch tells Quicksilver that he is always welcome in Genosha, she also states that Genosha is no longer Magneto's country; therefore banishing her own father.

Magneto has comprehensive control over all forms of magnetism and utilizes that control to manipulate ferrous metals and achieve a variety of effects.

Magneto is also capable of sustaining flight for very long distances and at varying speeds.

Magneto believes that mutants are the next step in evolution and that humanity must come to an end. He truly believes that humans can never overcome their fear and hatred of anyone different, so he must protect mutants from human oppression. However, Magneto is shown to have soft spots towards the both of his daughters Wanda and Lorna. He is shown to be a very just leader in Genosha. But, he is shown to not very a fond of his son named Quicksilver.

Magneto was voiced by Tom Kane. 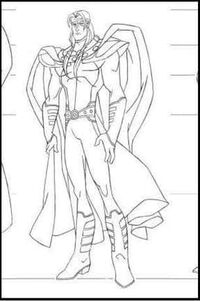 Concept art created for the proposed second season of Wolverine and the X-Men showed an Age of Apocalypse version of Magneto. It was shown along with Archangel, Weapon X, Holocaust, Colossus, Sunfire, Cyclops, and Sabretooth. In the comics, he formed the X-Men in this time to honor the death of Charles Xavier by a time traveler. He was also married to Rogue.

Retrieved from "https://marvelanimated.fandom.com/wiki/Magneto_(Yost_Universe)?oldid=67224"
Community content is available under CC-BY-SA unless otherwise noted.