Erik Magnus Lehnsherr, also known as Magneto is a mutant. He is a revolutionary leader who believes mutants are the next stage of evolution for humanity and are destined to take over the world. He is a friend and enemy to Professor Charles Xavier. He is often an adversary of, though sometimes an ally to, the X-Men. 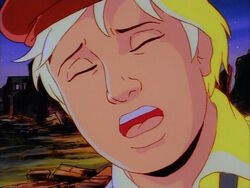 Erik Magnus Lehnsherr was a survivor from World War II, which took his entire family. During one attack he looked for his Mama and Papa but become captured by Nazis and taken away.

After the war Magnus met up and formed a friendship with a young Charles Xavier and began working in a hospital saving other survivors. Nazi Party remnants attacked the country they were working in attempting to take it back. Xavier and Magnus followed and saved several patients using their powers. However, Magnus wanted to destroy the Nazis while Xavier wanted them spared. The event led to a rift between the two and they went their separate ways. 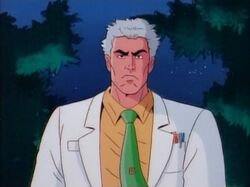 Magnus eventually began using the name Magneto. He would go and attack places like factories and military bases. Xavier eventually stopped him. Although he was stopped he came back several years later even more powerful and determined than before.

Upon hearing that Beast was incarcerated he went to the prison to break him out. Though Beast would refuse Magneto's offer and instead stay so that his trial would serve a greater purpose to the mutant community. Magneto thought he was a fool and left him.

Later he attacks a military base and uses his powers to launch their nuclear armament to then destroy the same base. The X-Men members Wolverine, Cyclops, and Storm went to confront him. However, none was powerful enough to stop him. The missiles launched but was stopped by Storm and her manipulation of the weather.

Following his defeat, Magneto chose to draw out Xavier. He attacked Metro Chemical in the hopes that Xavier would personally respond if he endangered human lives. He was right and the X-Men came to stop him. However, just like before Magneto proved too powerful and they were easily defeated. 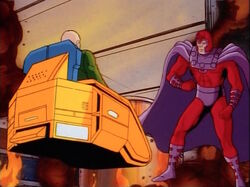 Magneto got his wish and Xavier showed up. Magneto once again extended an offer to let Xavier join him, but just like before Xavier refused. Magneto grew angry and was going to kill Xavier once and for all. Unfortunately for him Xavier entered his mind and made him relive memories of the war. Unable to deal with the traumatic experiences once again Magneto fled. He then vowed to raise an army of thousands to overthrow mankind and destroy Xavier.

In the first season finale, he kidnaps Senator Robert Kelly in order to once again attempt to begin a war, but is thwarted by a group of Sentinels. After Master Mold and the other Sentinels rebel against their creators and become a threat to the entire world, Magneto allies himself with the X-Men and they successfully eliminate the Sentinels, during which he saves Xavier's life in exchange for their earlier rescue of Magneto. 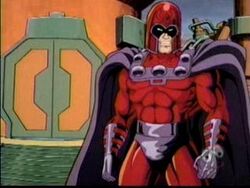 He appears in nearly every episode in the second season, in which he and Professor Xavier are powerless and travel throughout the Savage Land. At the end of that season, all of the X-Men save them from Mr. Sinister, and they regain their powers.

Later on, he creates Asteroid M as a safe haven for mutants who feel persecuted on Earth. Though his intentions are noble, a betrayal by his closest servant Fabian Cortez puts into motion a series of events after which he realizes that the world will never again trust him as the leader of the Asteroid, and he allows the base to be destroyed. Disheartened by the loss of his sanctuary, he does not care about even the impending assimilation of mankind by the Phalanx, until he receives news from the Beast, Forge, Mister Sinister and Amelia Voght that his son, Quicksilver, has been kidnapped by the Phalanx in the second part of the two-part fifth season premiere. He teams up with them to defeat the Phalanx and save everyone they had captured or assimilated.

By the end of the series, he has gathered up an entire army of rebellious mutants, and is poised to conquer the world, but receives news from Wolverine, Cyclops and Jean Grey that Professor Xavier is dying. Relenting, Magneto uses his power in conjunction with Xavier's in order to contact Lilandra, who takes Xavier to her planet where there is a suggestion that he may be cured. 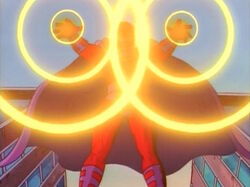 Magneto has the ability to generate magnetic fields and to manipulate existing magnetic fields. He is thus able to levitate, control, and move almost anything, most particularly metals) and to achieve a wide range of other effects. He can shoot beams from his hands that can destroy most things, lift anyone up into the air and move as he wishes, fly, and generate a powerful force field which he can use to protect himself and others.

Magneto was voiced by David Hemblen. He actually auditioned to play the role in the live-action X-Men film and was a final contender.

When casting the role, the producers had in mind a voice like John Vernon and an evil version of Charlton Heston.[1]

At the time of the series, his real name was Erik Lehnsherr, though it was later revealed to be Max Eisenhardt.

He has lead his own version of the Brotherhood of Mutants.

Lorna Dane is also his daughter.