Magma is from the Non MAU series X-Men: Evolution.

Amara Aquilla, also known as Magma, is a mutant and one of the new Mutants, a subgroup of the X-Men. 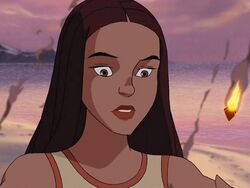 Amara was a child from Brazil who went to the Xavier Mansion to learn to control her mutant powers. She joined the New Mutants, a younger generation of mutants who would eventually help and/or replace the X-Men.

Due to her powers, she feels ill when away from land for too long like when she went on a cruise.

Magma has the ability to shoot lava out of her hands. She can also create " balls of fire" some may be large while others are small. Magma is also able to change from her human form, to a lava form. She is immune to heat, and is able to swim in volcanos in this form and possibly in her human form as well. Due to her powers, she also has a special connection towards volcanoes and the Earth itself. If she is not on land for a long period of time, she gets sick. Amara can also control lava and magma from volcanoes.

Magma was voiced by Alexandra Carter.

Retrieved from "https://marvelanimated.fandom.com/wiki/Magma_(X-Men:_Evolution)?oldid=34475"
Community content is available under CC-BY-SA unless otherwise noted.