Leech is a mutant with the ability to neutralize any other mutant power.

He joined the Morlocks because of his altered appearance. He speaks in broken English and refers to himself in the third person. He used his powers to stop Cyclops' eye beams so others could see his real eyes. He was captured by Lady Deathstrike and the Reavers while they went after the alien ship. His life force was stopped by the prisoner inside, but the X-Men saved him. On Christmas Eve he got sick and the other Morlocks went out to find help. Storm, Jubilee, and Wolverine used a transfusion to use Logan's healing factor to help him.

Leech has the power to negate the mutant abilities of others. 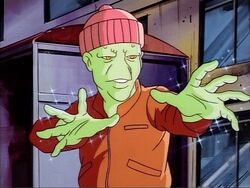 Leech was voiced by John Stocker.

First version of the character outside the comics, and currently the only one who doesn't have a real name as the comic version does.

Leech's telekinesis is original to the series and he does not have it in any other source.

Retrieved from "https://marvelanimated.fandom.com/wiki/Leech?oldid=66287"
Community content is available under CC-BY-SA unless otherwise noted.