For the ruler of Genosha, see Leader (Genosha).

Samuel Sterns, also known as the Leader, is a gamma-enhanced genius who is obsessed with stealing the power of the Hulk. 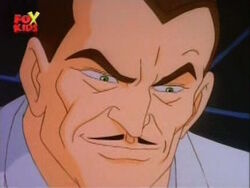 Sterns was part of the clean-up crew that arrived after the Gamma Reactor test that created the Hulk. An accident on the scaffolding caused him to fall into a pool of gamma radiation waste. His intelligence was greatly enhanced and he devoted himself to taking the power of the Hulk for himself. 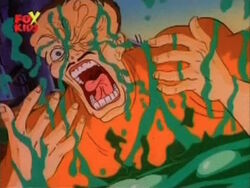 He teamed up with fellow gamma-powered villains Gargoyle, a Russian scientist, and Abomination, a large brute whose strength rivals Hulk's.

At one point, Leader found one of the rings of the Mandarin, which could allow him to travel through time. Hulk teamed up with Iron Man when Julia Carpenter became lost in time.

When Bruce Banner was separated from Hulk, he took the body and transferred his mind into it. However, Hulk's brutish mind was too much for him and he lost control.

Leader is arrogant and condescending due to his intelligence. He believes himself to be superior to everyone else and has no concern for the desires of others. His obsession with obtaining Hulk's power borders on foolishness.

Leader was voiced by Matt Frewer in all appearances.

He once freed Rhino to fight Hulk.