Sergei Kravenoff, better known as Kraven the Hunter, is a highly skilled hunter who has met Spider-Man as both foe and friend.

Whilst in Africa, Kraven's fiancé and love Dr. Mariah Crawford was attacked by a hoard of lions. The fight left Sergei critically wounded, Dr. Crawford used a wonder drug in hopes to heal his wounds. She was warned not to, as the drug, in its current condition was dangerous, but she felt she had no choice.

Kraven's physical recovery was astounding, but his mind was in a state of despair. He began hunting vigorously and now called himself Kraven The Hunter, forcing Dr. Crawford to search for a cure. Fleeing to the United States of America, she continued her research until Kraven followed her. She eventually concocted one after Spider-Man tangled with the Hunter. 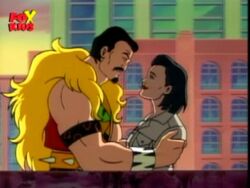 The tables were turned many months later. With Spider-Man now Man Spider, Dr. Crawford pleaded for Sergei to return to hunt Spider-Man down so he couldn't hurt anyone whilst she continued to perfect her cure for his condition. With some help from The Punisher, they managed to cure Spider-Man.

Disaster struck again after Dr. Crawford became seriously ill from the plague. Fearing for her safety, Kraven gave her the same serum, which tuned him into Kraven to heal her. When she changed into Calypso, he again took the serum to hunt her down before she hurt anyone. After Debra Whitman managed to restore her sanity, Kraven and Calypso fled together.

Kraven is a highly skilled hunter with a vast knowledge of animals' actions and methods. He knows a great deal of traps as well as various potions and powders.

Under the influence of the serum, his strength, agility, and endurance is vastly increased. He is about as strong as Spider-Man. He also has animal-like senses comparable to Wolverine.

Kraven is a noble man with a high sense of honor. He saw Spider-Man as a worthy adversary, not simply an enemy to be conquered as other foes of the hero do. He was willing to help Spider-Man in his time of need and respected his desire for a secret identity.

Kraven was voiced by Gregg Berger.

Chameleon is his half-brother.

He was a member of the original Sinister Six.

While Spider-Man wore a replica of the black suit, Kraven drugged the hero and buried him alive. He wore his own black suit and tried to be Spider-Man. When the wallcrawler emerged Kraven took his own life with a shotgun.