Kalek is a captain in the Kree Empire. He encountered the planet eater Galactus twice and heroically died in the defense of Zenn-La.

Little is known about the early life of Kalek.

Kalek was a Kree who rose in the ranks of the Kree Empire to become captain of a spaceship. He, like the other Kree, served the Kree Supremor.

Like the rest of his species, Kalek hated the Skrull and hoped to ultimately defeat them. Though he was considered one of the more peaceful members of his species.

At one point Kalek made his way to the Horseshoe Nebula. There he witnessed a communication from the Watcher Uatu. He fled the nebula just before the people were massacred by a force, later revealed to be the mighty Galactus. Several Skrull were also killed in the nebula.

He had heard about the planet of Zenn-La and how they would teach people peace and harmony. He applied for him and his crew to join in an effort to make peace with the Skrull.. They were, along with Commander Husserl of the Skrull Confederacy. The hope was that the Kree and the Skrull would learn how to put aside their differences and make peace. 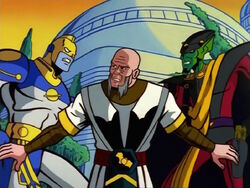 Upon landing on the ship he was greeted by the current Master of Zenn-La along with Husserl. They then walked to a large open space where more students congregated. Both were honored to be there, though Husserl angered Kalek by pointing out that he was accepted before him.

The two prepared to fight but Master stopped them saying that it didn't matter who accepted first. Master noted that both came to find peace. They were then approached by Norrin Radd and Shalla-Bal.

The Master then asked Norrin Radd to demonstrate the purpose of weapons on Zenn-La. Kalek and Husserl handed over their weapons. Norrin walked over to a nearby rock and placed them down. He put his hands together and the two weapons disappeared.

Kalek and Husserl approached the rock in wonder. Norrin told them that Zenn-La was unlike any planet they had been to before. Husserl then teased Norrin by asking to hear stories about planets he's been to causing Norrin to become frustrated. 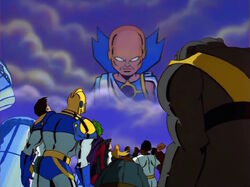 Just then Uatu appeared as a face in the sky and spoke to the people on Zenn-La. Kalek immediately recognized him from his previous adventures. Husserl then revealed his nest brother died at the Horseshoe Nebula.

The Master said that he felt the Watcher's presence. The Watcher then revealed that he broke his most sacred vow by speaking to them. Uatu went on to say that Zenn-La had become a beacon of light in a galaxy of darkness, and that he hoped to save the planet and its people.

Watcher told them about the coming of Galactus. The students asked Master what to do and he asked the Watcher. Uatu explained that Galactus is neither good nor evil and has only come to feed, not caring if the people survive.

The Watcher explained that the people of Zenn-La have changed the destinies of entire galaxies by reaching into the hearts and minds of others. They must then change their own future.

As Uatu disappeared the ship of Galactus descended from the clouds. Upon seeing the ship the people paniced and began running around like mad, except for the Master, Norrin, Shalla-Bal, Kalek, and Husserl.

The tentacles from the ship dropped down and began destroying the planet.

Master led the group into a building. He said that they must perform the Ceremony of Outreaching to contact Galacctus. Kalek noted to Husserl how unusual of a time it was to learn about peace. They approached a large crystal and the three native Zenn-Lavians touched it causing it to glow.

Master talked to Galactus but the planet eater fired a beam causing him great pain. He collapses and Norrin dropped to his side. The crystal overloaded and exploded.

Kalek and Husserl dug themselves out of the rubble and found Shalla-Bal unconscious. They uncovered her from the debris and picked her up. She woke up and asked for Norrin. 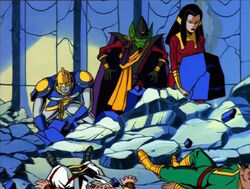 Shalla-Bal and Norrin refused saying that they belonged on the planet. The Master told them that if he failed again it would be their job to continue the teachings of their people. He also noted that Norrin always wanted to leave the planet.

Master turned and picked up a piece of the crystal. He held it up causing it to glow. However, it overloaded and Master collapsed. At that point Kalek and Husserl decided they both must fight Galactus. As they left Husserl bragged that his crew would strike the fatal blow.

The two ran outside to their ships. The ground began to collapse around them. They ran across a bridge but it cracked and fell apart with Kalek on it. He fell and grabbed the side. Husserl pulled him up and the two exchanged a happy glance. They then entered their ships and took off.

They flew towards Galactus. Husserl and Kalek exchanged one final voice of support before attacking. Kalek hoped that Husserl and his crew would bring honor to the Skrull Mother. Husserl returned the favor by hoping Kalek would bring victory to the Kree Supremor.

They both attack the ship but did no damage. They fired on Galactus himself but he was protected by a force field. Galactus turned to view the two insignificant ships. 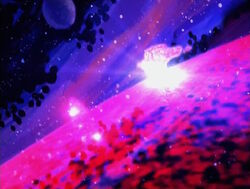 The two ships headed underneath and attacked the tentacles. Galactus followed their ships. He then fired a blast and the two ships were completely obliterated killing all aboard.

Kalek is a soldier. As such he hates his enemy, the Skrull. This comes from the centuries of fighting between their two factions. Despite this, he is one of the few willing to put aside their differences and attempt to find peace. He went to Zenn-La hoping to find harmony even if he had trouble getting along with a Skrull. Though he still had trouble dealing with a Skrull soldier. 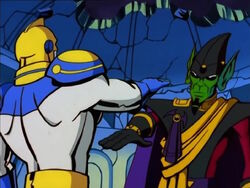 He also has a sense of honor. When faced with death he was able to put aside their differences and fought together to combat a greater force. He was also able to wish that Husserl would please the Skrull Mother, showing that he has quite a bit of knowledge of the enemy.

Kalek was voiced by Don Francks, who previously voiced Sabretooth, Puck, and Shaman on X-Men.

Kalek is original to Silver Surfer and has no specific comic book counterpart.

Retrieved from "https://marvelanimated.fandom.com/wiki/Kalek?oldid=73566"
Community content is available under CC-BY-SA unless otherwise noted.