Juggernaut is from the Non MAU episode "Pryde of the X-Men".

Juggernaut is a powerful mutant and part of the Brotherhood of Mutant Terrorists.

Cain is the step-brother of Professor X. Cain hated his step-brother and sought to destroy him, even though Xavier always welcomed Cain into his home. At some point Cain joined Magneto's Brotherhood and took on the name of Juggernaut. He was joined with White Queen, Pyro, Blob, and Toad.

Magneto set a plan into motion. Blob and Pyro were sent to the Deep Space Observatory to distract the X-Men while Juggernaut and Megneto attacked the Xavier Mansion to acquire the Mutant Power Circuit. It worked and the X-Men departed leaving Xavier and Kitty Pryde behind.

Together the two destroyed the Mansion's defenses while Kitty and Xavier watched on monitors. Too worried to notice, Kitty phased through Cerebro's defensive circuits allowing the two evil mutants to enter.

Xavier scanned Magneto's mind and learned that he came for Cerebro's Mutant Power Circuit. Xavier handed the circuit to Kitty just as the two attackers entered. Using her powers she ran off with Magneto in hot pursuit while Juggernaut confronted his step-brother. Magneto took the circuit and returned to Juggernaut.

Inside Asteroid M Magneto told Toad to put the circuit into their computer, and then swatting away a small dragon. Toad did so then chased a small dragon away.

After recovering Xavier used his powers to find and discover what Magneto was doing. On Asteroid M Magneto had successfully installed the Mutant Power Circuit and was diverting the Scorpio Comet towards Earth. It would have killed most of the human race so that mutants can rule.

Magneto watched on a monitor while Cyclops blasted his way through the airlock. Magneto sent the Brotherhood after them, after swatting away the dragon.

The X-Men encountered Pyro so Dazzler decided to take him on. The X-Men went on without her until Toad surprised and attacked Wolverine. The other X-Men continued on only to run into the Juggernaut. Colossus took him on while Cyclops and Nightcrawler continued on.

When the comet was diverted towards the asteroid, and the Brotherhood left for Earth. 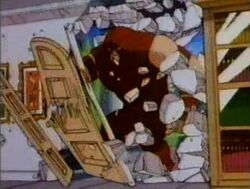 Juggernaut has superhuman strength. He is able to match the strength of Colossus and seems impervious to most damage.

Juggernaut is voiced by Ron Gans.

Juggernaut's last name is not revealed, only his first.

Cain got his powers from a supernatural entity called Cyttorak. This episode does not state the source of his powers so it is assumed that he is merely a mutant.

Retrieved from "https://marvelanimated.fandom.com/wiki/Juggernaut_(Pryde_of_the_X-Men)?oldid=79001"
Community content is available under CC-BY-SA unless otherwise noted.