Anthony Joseph Perry (born September 10, 1950), credited as Joe Perry, is a musician who was the composer of the theme song to Spider-Man. His music was included in the Spider-Man Unlimited "Worlds Apart, Part One". 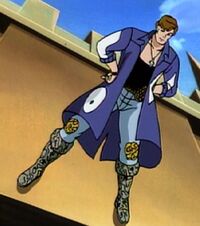 When making the theme song, Perry used references from the theme from the 1967 classic series Spider-Man. The episode "The Alien Costume, Part One" had Peter Parker dress like him as a tribute. Part of the theme was used in the sequel series, Spider-Man Unlimited, premiere episode "Worlds Apart, Part One".

As a tribute to the lasting impact of the series, the theatrical film Spider-Man: Into the Spider-Verse references the musician with an Easter egg for a billboard advertising Perry Joe.

Retrieved from "https://marvelanimated.fandom.com/wiki/Joe_Perry_(Real)?oldid=79400"
Community content is available under CC-BY-SA unless otherwise noted.