Jean Grey is from the Yost Universe series Wolverine and the X-Men.

Jean Grey is a telepathic and telekinetic mutant who was one of the first five members at Xavier's Institute. She disappeared for a short time, but, was found by the rest of her team.

Jean Grey lived with her parents, until Magneto and Charles Xavier made visits to her house, Magneto trying to recruit her and Professor X trying to help her. She left with Charles and Scott to join the X-Men. While Charles and the other four X-Men went to confront Magneto, Jean was left inside of the Blackbird.

However, after Magneto used his powers to move the Blackbird, she got out and fought with her fellow X-Men. She watched as Cyclops, Iceman, Beast and Angel were easily defeated by Magneto. Magneto threatened her by putting a bus on top of Cyclops, who kept his eyes close so he didn't shoot anyone.

Jean used her powers against Magneto before she communicated with Scott via telepathy. She told him to open his eyes, Scott did not want to. Jean told him that she would keep him from using his powers. After Scott opened his eyes, Jean suppressed his powers and told him to shoot Magneto.

After Magneto was defeated, Jean became closer with her teammates, all giving her high fives and stayed on the X-Men team for years afterwards. At some point Wolverine arrived at the mansion. She saw him through the window and he instantly took a liking to her. She ducked away in an effort to not be seen by him. He confronted her and tried to flirt with her, only for Jean to get away from him.

Jean made him promise to her that he would not fight Cyclops. Wolverine, however, was not the one she should have been worried about.

On the day of the explosion at the institute Jean felt something in her mind and this caused her to use the powers of the Phoenix, she ended up in a coma.

When Jean woke from her coma she had amnesia, and got aggravated by the nurse who was looking after her, thus using her telepathic powers. She was then chased by the MRD, and so she send out a telepathic pulse causing all of New York to become unconscious.

Jean was then sought after by Mr. Sinister who sent Archangel to capture her, he succeeded by beating Emma Frost and Scott Summers and taking Scott too. Mister Sinister then took Jean's DNA, yet the other X-Men came and brought her back to the X-Mansion.

After she was placed in the medi-lab Emma Frost used her telepathic powers to render all in the Mansion unconscious and the Inner Circle took Jean.

Jean woke up, in different clothing and in a different location with Emma Frost being the only one in the room. She asked Emma what happened and if Scott was okay. Emma assured Jean that Scott was fine, but, was not there. She told Jean to come with her, so that she could explain fully. Jean trusted her and took her hand. The two walked through the area.

Jean was explained to by Emma about the Hellfire Club. She went into a room with Emma, only to be confronted by the other members of the club. Jean told Emma that she needed to see the Charles and that together the two would be able to stop the Phoenix.

As she opened the door, she was knocked out by Emma. Her comatose body was placed on a table by the Stepford Cuckoos. She was tricked by the Cuckoos in to believing one of them was Xavier, they imitated his voice.

After the Cuckoos had the Phoenix Force transferred into them, Jean woke up to Emma Frost again and hit her with her telekinesis. She trapped her and then left with Scott to beat the Cuckoos.

After Emma sacrificed herself and was killed, Jean hugged Scott after being separated from him for so long.

Jean and Scott first met each other when they were teenagers. Jean took a liking to Scott upon first seeing him, as did Scott to her. She helped him control his powers during their first battle with Magneto and gave him commands on where to shot him. After the team won, Jean and Scott kissed.

Their relationship stayed the same throughout the years until Wolverine came into the picture. After Jean disappeared, both she and Scott thought of each other. When finally reunited, Jean's memories had not yet been restored. When she finally got her memories back, she was overjoyed to see him.

Logan and Jean like each other, complicating her relationship with Scott.

Although the two only briefly knew each other, Jean and Emma's relationship is a bit convoluted. At first, it seemed as though Emma wanted nothing more than to help find Jean after she went missing. However, after the team found Jean, Emma knocked out everyone and took Jean to the Hellfire Club. Jean woke up to Emma, who told her about the Club and the Phoenix's history. She knocked her out shortly after Jean refused to stay.

Jean Grey is a powerful Telepath and has great telekinetic abilities. She can also use the Phoenix when distressed. The power of the Phoenix seems to come to her out of its own will, with little regard for what she may think of its presence. It's powers are extremely damaging and if it fell into the wrong hands, a national travesty would take place. Jean was originally unaware of its history and the many people it had controlled over its years of gathering Telepaths as hosts and killing others. 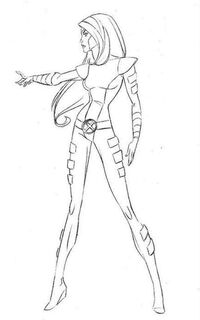 Concept art was created for the proposed second season of Wolverine and the X-Men. The art showed Jean in a costume closer to the version seen on X-Men.

One can only guess what would have happened

Concept art created for The Avengers: Earth's Mightiest Heroes showed her and Cyclops over Ant-Man, presumably the Scott Lang version. It's possible this was for a potential third season.

Jean died as Phoenix and Scott began a relationship with Emma.