James LaRue Avery (born November 27, 1945; died December 31, 2013) was an actor who played War Machine, Whirlwind, and Blacklash on the first season of Iron Man. He reprised War Machine on Spider-Man, along with Robert Hays, despite already being replaced by Dorian Harewood, who was a recurring actor as Tombstone, on Iron Man.

He is best remembered as the voice of primary villain Shredder on the 1987 series Teenage Mutant Ninja Turtles animated series as well as patriarch Philip Banks on The Fresh Prince of Bel-Air where he played the father of fellow Spider-Man guest star Alfonso Ribeiro.

Avery was born in Pughsville, Virginia on November 27th, 1945. He was raised in Atlantic City, New Jersey.[1]

At some point, he began suffering from diabetes.[2]

He wanted to be like the author Richard Wright living in Paris, but his life took a different turn.[3] He loved the arts and wanted to be a writer but got involved in theater.[4]

He left home at the age of eighteen because, as he said, "I had too good a time."[5]

After graduated from high school, he joined the Navy. He served during the Vietnam War from 1968 to 1969. Following the war, James moved to San Diego, California.[6]

He eventually won a scholarship to attend the University of California, San Diego. He eventually graduated with a Bachelor of Arts in Drama and Literature. He is classically trained as an actor.[8]

In 1969, Avery received an honorary Doctor of Humane Letters from the Virginia State University.

His first acting role came when he played God in the play J.B. for the San Diego Community College.

Because of his large size, he was six feet and five inches tall, and deep voice Avery was frequently cast in professional roles such as judges, professors, and doctors. He played judges on 1983's Webster, 1984's Night Court, 1986's L.A. Law, and 1995's Murder One.

His first film role was a dancing man in the film The Blues Brothers.

He would appear in a single episode of The Jeffersons, which his sitcom would later reference frequently. He made several appearances in the police drama Hill Street Blues. He voiced main character Turbo in the animated series Rambo: The Force of Freedom.

Avery played a detective in the police comedy Fletch.

He had a recurring role as Winslow in the series Beauty and the Beast.

In 1987, Avery tried out for the part of and was a finalist for the Klingon Worf on Star Trek: The Next Generation, but lost the role to Michael Dorn.

His longest role was as the main villain Shredder in the 1987 series Teenage Mutant Ninja Turtles. The series was much lighter in tone as compared to the comics, but helped propel the franchise into mainstream consciousness. He played the role for seven seasons, with fellow Iron Man actors Harewood and Jim Cummings filling in some episodes before being replaced with Townsend Coleman.

In 1988, he played Les' DMV Examiner in the film License to Drive.

Avery married his wife Barbara in 1988 and stayed together until his death.

In 1990, Avery got to travel around the world as the host of PBS's Going Places. As part of the show, he went to places including Turkey, Bali, Madrid, and Yellowstone National Park.[9]

He and Harewood would both play Sir Bryant on the animated series The Legend of Prince Valiant based on the comic strip.

The most famous role for Avery was as lawyer-turned-judge Philip Banks on the six seasons series The Fresh Prince of Bel-Air. He played the father of Ribeiro's Carlton and uncle of the title character Will Smith, played by rapper-turned-actor Will Smith. Avery's Banks was often angry at Smith for his lifestyle but always loving and there for him.

Philip Banks was voted number thirty-four in the TV Guide list of "Fifty Greatest TV Dads of All Time".[10]

He appeared with Spider-Man actor Christopher Daniel Barnes as Steve Yeager in The Brady Bunch Movie.

He voiced the Shaman in Gargoyles.

Avery voiced War Machine for the first five episodes "And The Sea Shall Give Up Its Dead", "Rejoice! I Am Ultimo, Thy Deliverer", "Data In, Chaos Out", "Silence My Companion, Death My Destination", and "The Grim Reaper Wears A Teflon Coat". He also voiced Whirlwind from the beginning through the episode "Iron Man To The Second Power, Part Two" as well as Blacklash.

When War Machine and Iron Man appeared on the Spider-Man episodes "Venom Returns" and "Carnage", Avery was brought in to voice the character alongside Robert Hays, even though Harewood was voicing Tombstone on the series.

Avery went on to star in the series Sparks, another series where he played a lawyer. Coincidentally, he played along with fellow James Rhodes actor Terrance Howard.

He went on to star in the HBO film Dancing in September, about African-Americans trying to make a television series.

He rejoined with Howard for recurring role on the Showtime series Soul Food. It was the longest running drama with a predominantly black cast in the history of North American prime-time television.

He had a recurring role starting in 2001 on The Walt Disney Company's series The Legend of Tarzan as Chief Keewazi.

Avery made guest appearances on the crime drama The Division.

He was considered for a role in the 2005 film The Devil's Rejects.

He eventually played a Klingon in 2005 for the Star Trek: Enterprise episodes "Affliction" and "Divergence".

He had a recurring role as Officer Kennedy in the later seasons of That '70s Show.

His wife is the Dean of Students at Occidental College in Los Angeles.

He has worked on stage. He played the title role in Othello for the Oregon Shakespeare Festival. He also played the Back Alley and Met Theatres in Los Angeles as well as other locations across the country.

Most recently, he had a recurring role on The Closer as Doctor Crippen alongside J. K. Simmons, the Br'er Bear in Kinect Disneyland Adventures, and an episode of Grey's Anatomy.

In 2007, he interviewed with the New York Film Academy saying, "You can either be a movie star or an actor. I'm an actor. (But) I've done pretty good."

On November 11th, 2013, Avery underwent open heart surgery. Following the surgery, he was said to be "practically living" at the hospital.

On December 31st, 2013, Avery died in Glendale, California following complications from his surgery. He was sixty-eight years old. His mother said, "It breaks my heart. My child was a great person who helped anyone he could. He was really just a nice person whose great passion in life was reading."

Ribeiro stated on his Facebook page, "The world has lost a truly special man. I am very saddened to say that James Avery has passed. Even though he played my father on TV, he was a wonderful father figure to me in life. He will be deeply missed." Janet Hubert, who first played his wife on Fresh Prince, released a statement. "RIP James, all the world is a stage, and we are all merely players in this production called LIFE."[11] Smith said, "Some of my greatest lessons in Acting, Living and being a respectable human being came through James Avery. Every young man needs an Uncle Phil. Rest in Peace."[12] Geoffrey the butler actor Joseph Marcell said called him a gentle giant.[13]

Avery's worked up until September of 2013. He was shooting Wish I Was Here, becoming his final role.[14]

Avery was survived by his wife of twenty-six years, Barbara, and his mother, Florence Avery. While he had no children of his own, he has a stepson named Kevin Waters.

The song No Role Modelz by 2014 Forest Hills Drive played tribute to Avery saying, "First things first rest in peace Uncle Phil. For real, you the only father that I ever knew."

His body was cremated and his ashes were scattered near the Pacific Ocean. 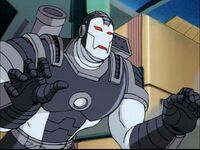 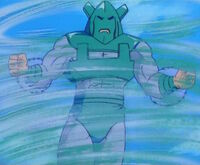 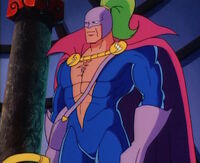 Blacklash
Add a photo to this gallery

Retrieved from "https://marvelanimated.fandom.com/wiki/James_Avery?oldid=80268"
Community content is available under CC-BY-SA unless otherwise noted.