Jacob Kurtzberg (born August 28, 1917, died February 6, 1994) is a legendary writer and artist who worked for Marvel Comics and DC Comics going under the name Jack Kirby and Jack Curtiss. Along with Joe Simon, he created Captain America. He also worked with Stan Lee in creating the many characters including, but certainly not limited to, the Fantastic Four, X-Men, Hulk, Spider-Man, Thor, and Silver Surfer.

In the 1980s, he attempted to make a Thor animated series along with Alfredo Alcala to be produced by Ruby-Spears Productions.

Kirby served in World War II and returned to the comic book industry afterwards. He worked for DC, Harvey Comics, Hillman Periodicals, and Crestwood Publications. He and Simon are credited with creating the romance comic genre. 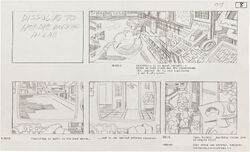 He eventually went back to Timely in the 1950s, then calling themselves Atlas Comics. He and Stan Lee went on to create many of Marvel's iconic heroes. However, he felt he was being treated unfairly and left in 1970 for DC. While there he created the Fourth World saga and the New Gods. 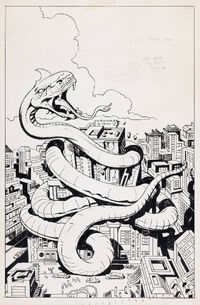 He did limited acting including one episode of Starsky and Hutch, an appearance as a sketch artist on the live action The Incredible Hulk series with Lou Ferrigno, and an episode of Happy Day of Birth. He did character designing work on shows like The New Shmoo, The World's Greatest SuperFriends, Thundarr the Barbarian, Goldie Gold and Action Jack, Turbo Teen, SuperFriends: The Legendary Super Powers Show, Mister T, Chuck Norris: Karate Kommandos, Centurions, Rambo, Lazer Tag Academy, and Sectaurs.

In 1994, Kirby died at the age of 76 from heart failure. The Jack Kirby Comics Industry Award and the Jack Kirby Hall of Fame were created in his honor.

In recent years, the estate of Jack Kirby attempted to sue Marvel Entertainment, as well as The Walt Disney Company, for the rights to characters Kirby helped to create. Marvel fought back saying that the works were created for hire and not Kirby's to control. So far, the courts have sided with Marvel.