Features built into his suit include:

Given the diversity of the armors Stark has built over the years, his weapons are variable. Virtually all of his armors seemed to include repulsors in the palms as standard armament and a unibeam projector in the chest region. His Mark VI armor contained an internally stored gauntlet missile that when fired released multiple target seeking guided projectiles that could destroy targets and stun opponents. One of his older armors contained shoulder mounted mini missiles and could augment it's repulsors to emit force fields. His Mark VII armor could fire from its gauntlet a long range missile that doubled as a package delivery system.

Sub-munitions deployed
Add a photo to this gallery

The history of Iron Man's armor closely follows his Earth-616 and Earth-199999 counterpart. Presumably being wounded ironically by his own weapons that put shrapnel near his heart Tony Stark built a miniature Arc reactor to power the electromagnet to keep the shrapnel at bay. Having constructed a powered suit of armor to escape the terrorists holding him, he returns to the United States and continues to develop more sophisticated armor models to address concerns dealing with those that would use his or other technologies for evil purposes. Feeling responsible for his tech being stolen. He continues to upgrade his armor as the need arises and sub-variants for various environments such as outer space, arctic warfare, etc. 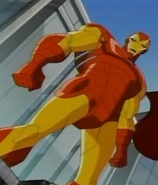 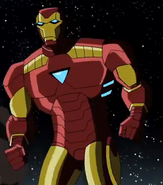 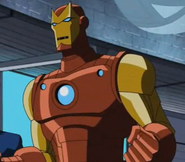 Iron Man's armor design greatly resembles his Earth-199999 counterpart. All powered by his arc reactor and being following a "Mark" designation for each successive model introduced.

Retrieved from "https://marvelanimated.fandom.com/wiki/Iron_Man_Armor_(Yost_Universe)?oldid=67928"
Community content is available under CC-BY-SA unless otherwise noted.