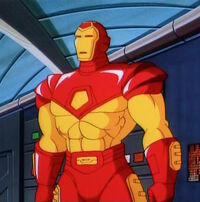 After the death of Walter Stark Tony was kidnapped by Mandarin and The Hand. He was forced to build weapons for him with a man named Yinsen. Tony had damage to his spine requiring a device to keep him alive. Instead of the weapon, they built a suit of armor to escape, though Yinsen was killed doing so.

Later, Tony used his design to build hundreds more suits including the Subterranean Drill Armor, Inferno Armor, Samurai Armor, Radiation Armor, Lava Armor, Magnetic Armor, Undersea Armor, Space Armor, and Stealth Armor. He put them all in an armory inside Stark Enterprises where he also lead the team Force Works. Once it was invaded by Mandarin who made his own armor.

He built the suit so that each piece could operate on their own. When Fin Fang Foom blasted him out of the sky, Tony used his armor to keep him warm by recalling his memories. He He built a robot called I.R.V.I.N.G. so that he could change armors while out in the field. He later designed his armor so he could have H.O.M.E.R. come along with him in the suit. He gave his friend James Rhodes a similar set of armor to fight crime.

Just before Justin Hammer tried to kill him, Tony redesigned his suit. He initially helped the Avengers with this armor. He further redesigned it before he helped Spider-Man fight Venom, Carnage, Dormammu, and Baron Mordo. When he helped the latest version of Avengers he had a completely new armor. During the Secret Wars his suit was damaged. The heroes tried to remove it, but Tony stopped them saying that it was keeping him alive.

Firepower destroyed one set of armor. So he built a new armor and made a large armor that he later used when he had to fight the Hulk. When Mandarin returned from the dead he prevented the use of any technology. So Tony was forced to design a Bio-Energy Armor.

Iron Man's armor is based off the Mark XI "Modular Armor", which the character was using at the time. It is notable that each piece of the armor is a stand alone subsystem that can be interchanged at will.

The action figures for the series featured two designs not seen in the series. One was an all silver armor called the Arctic Armor and the other was based off the Silver Centurion design called the Hologram Armor.

Tony Stark and Ho Yinsen were held captured by a man named Wong Chu, not the Mandarin.