Iron Man is the animated television series featuring Iron Man in the Marvel Animated Universe. The show debuted alongside the animated Fantastic Four series as part The Marvel Action Hour, comprising the first half. It is the first series to focus on Iron Man, not counting the Iron Man segments of The Marvel Super Heroes, and was followed by Iron Man: Armored Adventures and Marvel Anime: Iron Man.

The series ran for two seasons for a total of twenty-six episodes starting September 24, 1994 and ending February 24, 1996. 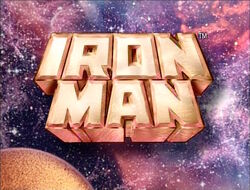 Iron Man is notable for being one of the few television shows to be rerecorded in THX; a high-fidelity sound reproduction standard typically found in movie theaters, screening rooms, home theaters, computer speakers, gaming consoles, and car audio systems. This was normal for motion pictures but was a highly unusual practice for television.

For the second season Marvel switched to another animation studio. With the change came new writing, new direction, and new music. Storylines were no longer limited to single or two-parters but spanned multiple episodes. The series also focused on issues of duplicity, consequence, and phobias. Despite the changes ratings remained low, unable to overcome the poor reception of the first season, and the series was eventually cancelled.

Robert Hays and James Avery reprised their roles for Spider-Man, even though Dorian Harewood had already replaced Avery as the voice of War Machine on this series and played Tombstone on the other. Avery and Harewood have a long history of voicing the same characters on a series.

Neal McDonough would go on to voice Bruce Banner on The Incredible Hulk and to play Dum Dum Dugan on the film Captain America: The First Avenger. 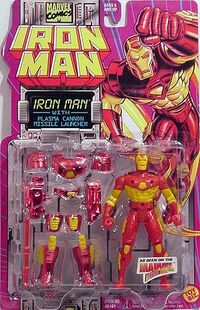 The show had a toyline through ToyBiz, first announced in July of 1994. It followed in the wake of a successful Spider-Man line. Each action figure was five inches tall. There were four series of figures produced while the show was on the air.

One of the main ideas for the line of toys was interchangeable vac-metallized armor. Armored characters were given removable armor pieces that could be interchanged and placed on other armored figures. Unfortunately, this cost more in retooling and production than a normal figure, and the vac-metallization cost more anyways. This increased cost and lowed the profit margin for ToyBiz than other series.

They also followed a concept set by Batman where they would feature multiple variants of the same character, most notably Iron Man. It helped that Iron Man used several different armors in the show, and made more sense than some variant versions of other characters.

Each figure had a card backing with art featuring the armor with a description of either the character or armor. Additionally, each series featured a different Iron Man armor to differentiate each one. In order of series, the featured armors were Main Armor, Stealth Armor, Arctic Armor, and Samurai Armor.

The line featured several armors not seen in the show. However, they were each created for the line and did not feature iconic armors from the comics that the show did not use.

There were many production problems with the line. Armor pieces did not always fit right and the vac-metallization led to chipping and loss of color. Also hurting the line was that the supporting characters were based on the recently started Force Works line and not yet popular among non-show fans.

The toy line had an immediately cult status among collectors. It became divisive among fans who either loved or hated them. Fortunately, or perhaps unfortunately, the toys never completely sold out and collectors were able to find the toys. Though, nowadays it is difficult finding mint figures with all the armor accessories[1].

The second series followed the first's formula three armored heroes, three villains, and one other member of Force Works. It consisted of Hologram Armor (not seen in the show), Stealth Armor, Space Armor, Hawkeye, MODOK, Blizzard, and Whirlwind. The villains and Hawkeye were difficult to find, likely due to collector interest. ToyBiz had reduced the number of non-armored characters, especially villains, due to slow sales of non-armored characters from the first series. Interestingly, the armored versions of this series sold less[3].

Series three featured U.S. Agent, Century, Tony Stark, Arctic Armor, Hulkbuster Armor, Titanium Man and Dreadknight. However, U.S. Agent was pulled so there was only six figures. There was also a planned civilian Tony Stark toy with Iron Man car that was cancelled. Century, Dreadknight, and Titanium Man were shipped less creating a perceived shortage which drove sales of those figures. However, sales were down overall[4].

The fourth series contained only five figures with a second War Machine, Inferno Armor, Samurai Armor, Subterranean Drill Armor, and Crimson Dynamo. Though the limited figures were an industry-wide trend and not limited to this series. At this point, the toys could only be found at KB Toys, though later at Toys "R" Us. Other retailers dropped the line due to the backlog of previous series. Even then, the toys at the two stores did not sell well. Crimson Dynamo was shipped in limited numbers, but was still easily available due to low sales. Hurting sales, all but Crimson Dynamo were original to the series limiting appeal to comic book fans who did not watch the show. This was the last series released for the show. When the fourth series had just came out the series was cancelled and toyline ended. [5]