An inauguration, also called swearing in, is a ceremony of formal investiture whereby an individual assumes an office or position of authority or power. 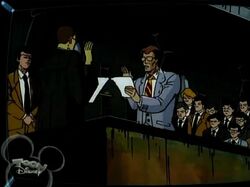 Robert Kelly was inaugurated following the Unnamed Female President on the steps of the U.S. Capitol.

Shortly after the ceremonies President Kelly made his inauguration speech indoors at a press conference. The Friends of Humanity tried to attack him by disguising one of their members as a mutant. Kelly had taken an anti-mutant stance but changed before the election, and the FoH were hoping to sway public opinion against the divergent species.

Retrieved from "https://marvelanimated.fandom.com/wiki/Inauguration?oldid=55449"
Community content is available under CC-BY-SA unless otherwise noted.