Robert "Bobby" Drake, also known as Iceman, is a mutant and former though founding member of the X-Men.

One of the original X-Men members, Bobby Drake had a low level of discipline often creating tension between himself and Charles Xavier. Tired of having Xavier on his back, Bobby and his girlfriend, Lorna Dane, left the school hoping to lead normal lives.

They succeeded in this for years, but they eventually began arguing with one another about their gifts. Lorna believed that they should be using them to help others, while Bobby simply wanted to lead a normal life. After he returned home to find their home ruined and Lorna missing, Bobby went searching. 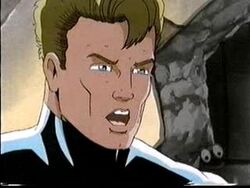 His search led him to a government compound, where he hoped to find answers. Instead, he found the X-Men, who took him back to the school against his will. After his pleas to be released were ignored by Cyclops and Xavier, Jubilee helped him escape and the two of them returned to the compound only to find Lorna had joined X-Factor, and had fallen in love with Havok.

He returned to the mansion shortly afterwards, he made peace with Xavier; when the latter offered for him to return as a member of the X-Men, Bobby turned down the offer, stating that nothing has changed and left with Jubilee hoping that they'll see him again.

In his youth, Bobby was impulsive, reckless, immature and undisciplined, similar to Logan; he did not follow orders without question and did not get along at all with most of his teammates, like Scott Summers; who he sees as nothing more than a soldier boy who was unable to think on his own, the only members of his team he did get along with; are Hank McCoy and Lorna Dane.

In his later years, Bobby is far more serious, responsible, far less reckless and impulsive, although he is now far more mature (than he was in his youth) he still does not trust any members of the X-Men (with the exception of Jubilation Lee) due to the fact that his then-girlfriend Lorna almost got killed on one of their missions.

Bobby has quite a temper and a cold nature, as he was immediately hostile towards Xavier and Scott for intervening in his rescue attempt of Lorna's (supposed) kidnapping, he coldly pointed out that he did not ask any of them the rest of life for him.

Although Xavier cut him more slack than the rest of his then-teammates, Bobby never got along with the latter at all, as Xavier constantly criticized him on everything he did wrong, even when he tried to follow orders like his then-mentor wanted, nothing he did was ever good enough for him, after his girlfriend Lorna was almost killed on one of the X-Men's missions, as he blames Xavier for that incident and that led to a huge falling out between the two, as the latter refuse to take responsibility for his mistake, and the two parted ways on bad terms with each other, as Bobby and Xavier would not see the other for many years.

Even before he left the X-Men (similar to Logan) Bobby and Scott never got along with each other at all, partly because of Scott's arrogance, and mainly because Bobby sees Scott as nothing more than a soldier boy who is unable to think on his own.

Hank and Bobby became good friends prior to him leaving the team.

Lorna is one of the few members of the X-Men that Bobby got along with. The two fell in love with each other. After Lorna almost got killed on one of the X-Men's missions, he left the team because of that incident and she followed him.

Although they had limited interaction with each other, Jubilation became Bobby's ally in his rescue mission of Lorna's supposed kidnapping, unlike most members of the X-Men, she did condemn Bobby for his actions, the latter also cared about Jubilation to the point of being protective of her, like a big brother.

Iceman was voiced by Denis Akiyama.