You may be looking for the Spider-Man episode "Hydro-Man".

Morrie Bench, also known as Hydro-Man, was a supervillain with the power to control and turn his body into water. He was a member of the Frightful Four.

Morrie Bench used to date Mary Jane until they broke up. He then joined the United States Navy. Whilst in the service, a freak accident dragged him to the bottom of the ocean and his body was covered in a strange chemical. He could now turn into water and control any liquid as long as he was close to it. He then called himself Hydro-Man. 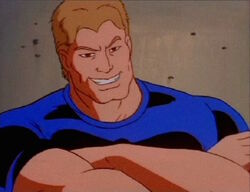 Hydro-Man joined the Frightful Four along with Trapster and Medusa under the command of Wizard. They tried to defeat the Fantastic Four. However, they were defeated.

Hydro-Man then went back to trying to impress Mary Jane. He began a series of high end crimes to get treasure for her. He kidnapped her but she ran from him. Spider-Man intervened but he was able to evade the hero. Mary Jane led Hydro-Man to a rooftop on a hot day far from water which was making his body unstable. In a rage, he lunged at Spider-Man who had followed them, one last time but he splashed across the roof and evaporated but was never seen again having apparently died in the process.

Miles Warren later recreated his mind through a clone from his DNA he retrieved from the scene of his demise. 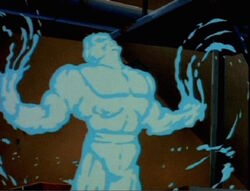 Hydro-Man can control water along with turning his body into water. He is able to control the water from any source such as pipes running through the city.

Morrie requires constant contact with water and a significant time away makes him weak. This can become even worse on hot days when the sun quickly evaporates water.

Morrie Bench was described by Mary Jane to be jealous and overbearing, especially when they were together, which was what led to their relationship ending. Upon gaining his powers, Bench became extremely arrogant. As Hydro-Man, he was obsessive and heavily delusional to the point that the believed that he could do everything, and that Mary Jane would come back to him, even if she stated otherwise. Hydro-Man's and arrogance obsession with his ex-lover worsened to the point that he came to fully disregard her rights as a human being and the safety of others, and remained in denial that she no longer wanted anything to do with him. As such, Hydro-Man can be considered a sociopath. While his feelings and love for Mary Jane appeared to be genuine, his refusal to accept that things were over between them drove him to try and flood the city to cause havoc if he couldn't have her, showing that he was willing to selfishly risk the lives of innocents if he did not get what he wanted.

A clone of Hydro-Man later returned but he, along with the cloned version of Mary Jane simply fell apart, due to an unstable cloning procedure. He was created by Miles Warren.

Hydro-Man was voiced by Rob Paulsen, who also voiced his clone, on Spider-Man and Brad Garrett on Fantastic Four.

Hydro-Man was a replacement for Sandman on both series, who could not be used in the series due to a proposed film. Both characters have similar powers, with the other being made of sand. While Hydro-Man was a member of the Frightful Four, Sandman was one the original team.

Hydro-Man is one of the few characters believed to have actually died since he is never seen again after evaporating.

In terms of Fantastic Four and Spider-Man being in the same universe, it's unknown just whether the version on Fantastic Four is the original or clone. "And the Wind Cries Medusa" aired one week after "Hydro-Man", though this is not indicative of an exact timeline. Given the backstory of Wizard and Medusa, it is probable that Wizard similarly helped Morrie control his powers and when the team was defeated he went after Mary Jane since Warren needed his DNA to develop the clone.

Retrieved from "https://marvelanimated.fandom.com/wiki/Hydro-Man?oldid=92933"
Community content is available under CC-BY-SA unless otherwise noted.