Not to be confused with Human Torch (Android).

Johnny Storm, also known as the Human Torch, is a member of the Fantastic Four.

Johnny Storm is the brother of Sue Storm. She married Reed Richards. Johnny began to constantly tease Reed's friend Ben Grimm. They went up into space where the Silver Surfer caused their bodies to mutate. Johnny's body burst into flames so he called himself the Human Torch after the android. Together they formed the Fantastic Four.

They fought villains such as Namor, Puppet Master, Galactus, and Doctor Doom. Johnny fell in love with Frankie Raye, but she left to be the Herald of Galactus. She also fell in love with the Inhumans Medusa, who was actually married to Black Bolt, and Crystal. 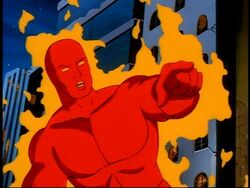 He joined Iron Man, Captain America, Black Cat, Storm, and Lizard in the Secret War under the command of Spider-Man. However, after they won the Beyonder erased their memories. 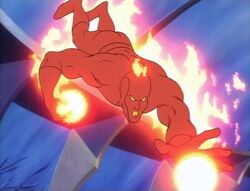 Human Torch can cover his body in flames, control fire, and fly.

Johnny Storm is rather arrogant and falls in love easily.

Human Torch was voiced by Brian Austin Green in season one and Quinton Flynn in season two and on Spider-Man. Flynn was the only one to voice on both series as the other three had been replaced since John Semper, Jr. was not a fan of Fantastic Four. He was unvoiced on The Incredible Hulk.

He sometimes plays tricks on Thing by masquerading as the member of Yancy Street Gang.